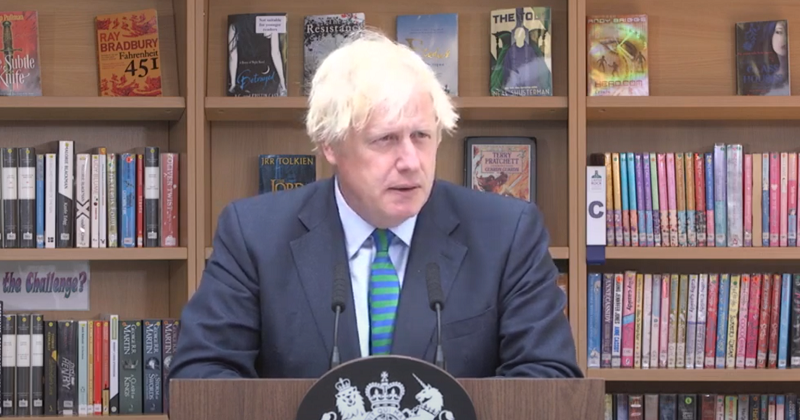 The fiasco over GCSE and A-level results this year has “finally been sorted out”, the prime minister has claimed.

During a speech at a school in Leicestershire, Johnson told pupils their grades were “almost derailed by a mutant algorithm”, and acknowledged how “stressful” the situation must have been.

The schools community is still reeling from the chaos caused by this year’s exams system, which was operated on the basis of centre-assessment grades that were then standardised by exam boards.

Ministers were forced to U-turn last week and allow centre-assessment grades to stand in the face of widespread criticism of the algorithm – which was designed based on government instructions – used to bring grades down.

“I’m afraid your grades were almost derailed by a mutant algorithm and I know how stressful that must have been for pupils up and down the country and I’m very very glad that it’s finally been sorted out,” Johnson said this morning.

His claim that the fiasco has been sorted out is likely to raise eyebrows in the education sector, with schools still grappling with the appeals process for pupils who were adversely affected despite the U-turn, and universities struggling to accommodate students.

Just yesterday, the exams regulator Ofqual announced that its chief regulator Sally Collier had resigned, to be replaced temporarily by her predecessor Dame Glenys Stacey with support from Ofsted chief inspector Amanda Spielman until December.

Stacey has been brought in to help the regulator respond to continuing turmoil following A-level and GCSE results days.

Johnson also used his speech to claim that the “huge sacrifice” made by pupils who missed out on education “has been worth it”.

The prime minister also insisted the “greatest risk” now faced by pupils was from “continuing to be out of school”.

“It’s because from now on from getting back into school, the hours and days and weeks of this new term, you will experience things with an intensity and clarity, believe me, that is seldom repeated in your lives.”