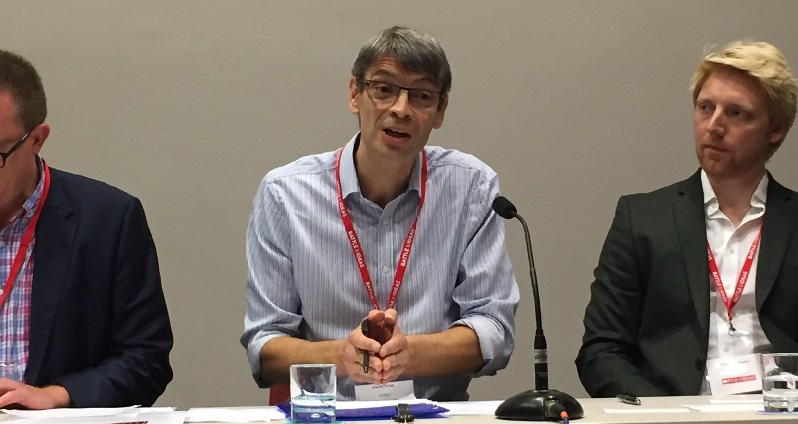 Dropping the grade boundaries for the newly reformed maths GCSEs will negatively affect the perception of the subject, according to the National Centre for Excellence in the Teaching of Mathematics.

Charlie Stripp, director of NCETM and chief executive of curriculum development body Mathematics in Education and Industry, said new lower grade thresholds for maths GCSEs are showing more of what pupils do not know than what they do, in speaking at the Barbican’s Battle of Ideas event today.

Newly reformed GCSEs in maths and English were taken by pupils for the first time this summer, using a 9 to 1 grading scale instead of the previous A* to G. For maths the new syllabus has been expanded, and requires pupils, for example, to demonstrate a greater grasp of problem solving.

To make sure that changes to the curriculum would not negatively impact the first cohort of pupils to sit exams in the reformed GCSEs, Ofqual stated that exam boards would set standards to ensure broadly the same proportion of students would achieve a grade four (the equivalent of the previous grade C) and above as achieved a grade C and above in previous years.

Stripp highlighted that to achieve a grade four in the new higher tier maths GCSE paper this year, pupils only needed to score around 20 per cent of the total marks. Before the reforms they would have needed 35 per cent of the marks for the same grade.

For the foundation paper, he said, where 65 per cent of the marks would previously have equalled a grade C, just 50 per cent can now get a pupil a grade four pass.

“Succeeding in maths at GCSE level should be based on you achieving certain criteria that say that you know this much maths fluently. If you do that then you should get at least a level four,” Stripp said.

“At the moment, you have got to get into a certain percentile to get the grade that you need to pass.”

Kris Boulton, director of education for online learning platform Up Learn and former deputy head of maths at King Solomon academy in north London, joined Stripp on the panel discussion about maths, and said it would not be good enough to allow grades to go down during the transition from the old to new GCSEs.

“I think you would feel a very genuine sense of injustice if you were one of the people who sat the exam in one year rather than the other and would have had a better grade last year,” he said.

The exams are aimed at both assessing what pupils have learned in maths, but also giving them “currency for future life”, and “those two incentives are in opposition to one another,” he added.

Boulton and Stripp were in agreement that the new National Reference Test, introduced by Ofqual this year to provide information on changes in performance over time, could help solve the problem of how to award GCSE grades.

A nationally representative sample of students will take the test shortly before taking their GCSEs each year and the information will be considered by Ofqual and the exam boards before GCSEs results are handed out.

“Something that I’m very keen to make happen over time is that the National Reference Test will say ‘this is where we want everybody to be, if you get to that level then you get that grade’,” Stripp said. “I think there’s hope for us moving forward in the future.”

The Battle of Ideas festival at the Barbican in London is a yearly forum which brings together speakers and delegates for free-thinking debates on a wide range of important issues.