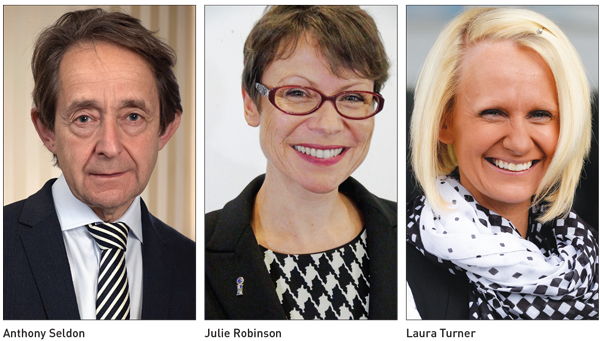 Anthony Seldon is leaving Wellington College after 10 years as the school’s 13th headmaster to become vice-chancellor of the University of Buckingham, which his father Arthur Seldon helped to found 40 years ago.

Sir Anthony says he has done “everything [he] wanted to do” at the Berkshire independent school, including pioneering the teaching of wellbeing and happiness, the teaching of multiple intelligences and opening two schools in China.

“I love the students, the staff, the parents and the whole Wellington community and I will miss everything about it. I’ll miss being part of a go-ahead and exciting institution — but the good thing is, I am going to a new one.”

The political historian, author and commentator on education has written or edited more than 35 books, including works on John Major, Tony Blair, Gordon Brown, and David Cameron.

The 61-year-old plans a 10-year tenure at the university. And after that? He says if he’s then too old to be a player, he’ll take over as manager of Manchester United.

“From now until then I hope they keep the seat warm for me.”

Julie Robinson has taken over as the new general secretary at the Independent Schools Council, the first former school headteacher to lead the organisation.

For eight years she was head of Vinehall Preparatory School, East Sussex, and before that, Ardingly College Junior School, West Sussex.

Most recently, Ms Robinson has worked for the Independent Association of Prep Schools (IAPS) as education and training director.

She says that in her new role she wants to “remove the stereotype” that surrounds fee-paying schools.

“My aim — and you can guess how long this is going to take me — is to help people outside independent schools appreciate the diversity within our sector and help them to see just how different some of these schools are.”

The 47-year-old has worked in education for more than 25 years. She completed an English degree at the University of Birmingham and then went to Westminster College, Oxford, for her PGCE.

Ms Turner, who is also an inspector for the Independent Schools Inspectorate, was head of pre-prep at the school. She moves to her new post this September.

The 34-year-old says her plans are to maintain the “high-standard” that has already been established and then continue to move the school forward.

“I want to focus on completing the plans for our building, oversee the changes to the curriculum and make sure we keep up the education pace that has been set.”

Ms Turner graduated with a degree in primary education from Northumbria University before completing a masters in early year’s education.