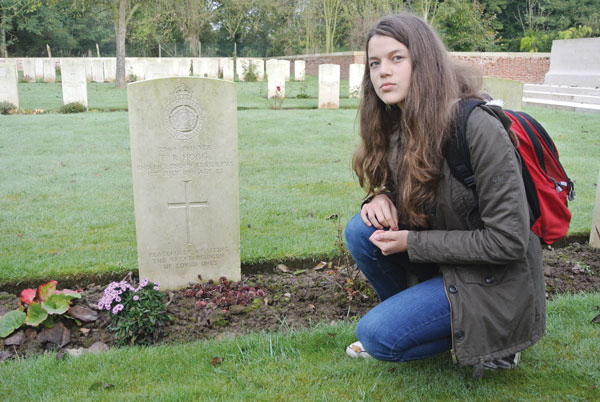 A Cornish schoolgirl has become the first in her family to see the grave of a relative who lost his life in the Great War.

Marking the 100th year anniversary of the start of the First World War, 15-year-old Ananda Lee from Mounts Bay Academy in Penzance travelled to France to pay her respects to her great-great grandfather’s cousin, Private Frank Reginald Hogg.

Private Hogg of London Regiment (Royal Fusiliers) was killed in action, aged 23, on July 1, 1916’ during the first battle of the Somme.

His grave is in the Hebuterne Military Cemetery, a small Commonwealth War Graves Cemetery, close to Albert in northern France.

Speaking of her visit, Ananda said: “The fact I saw his actual grave made me feel much more emotional. None of my family has ever ventured out so far, and the inscription on the grave was quite poignant: ‘Awaiting the Meeting of Loved Ones’.

“I feel as if a weight has been lifted off my shoulders; Frank Reginald Hogg can truly rest in peace.”

Delivered by Equity, a provider of overseas curriculum-based tours for schools and universities, in partnership with the Institute of Education (IOE), the programme funds two students and a teacher from every state secondary school in England to travel to the Western Front.

The tours, which take participants to Belgium and France, began earlier this year. Students can trace the Western Front from Ypres to the Somme and follow all the historic battles between 1914 and 1918, visiting battlefields and Commonwealth War Graves sites such as Tyne Cot Cemetery. They also see the Last Post Ceremony at Menin Gate.

Mounts Bay Academy history teacher, Peter Blackabey, who accompanied Ananda on her trip, said: “The centenary project has provided students and teachers with a wonderful and perhaps once in a lifetime opportunity.

“Many pupils or staff may never return to these places; others may make annual pilgrimages. The act of remembrance is just as important for people to make 100 years on; to realise the loss and tragedy that war can bring and the effect it has on a nation.”

Stuart Foster, from the Institute of Education, has said of the tours: “We have worked closely with Equity to develop a high quality tour programme that provides both outstanding support for teachers and engaging, relevant and meaningful learning opportunities for students.”

More than 12,000 students and teachers will join the tours, which continue until March 2019.