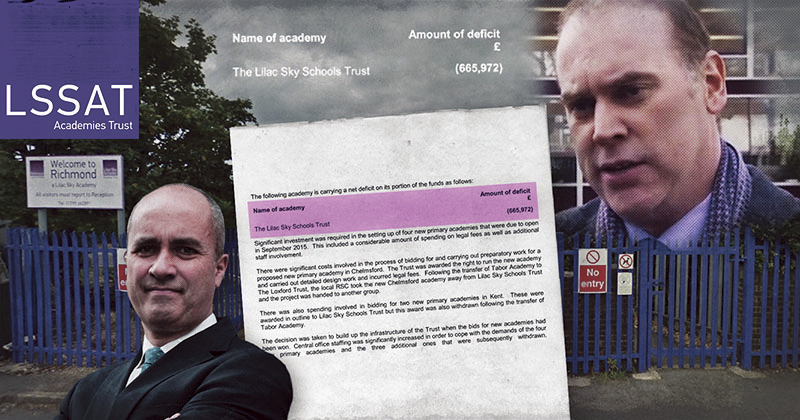 A crisis-hit academy chain failed to declare payments to close family members of its co-founder, including the cost of a computer delivered to one daughter at home.

Details of the payments to the relatives of Lilac Sky Schools Academy Trust co-founder (LSSAT), Trevor Averre-Beeson, emerged in a revised set of accounts for 2014-15. The accounts also include stinging criticisms of the trust’s past financial management.

Schools Week revealed during the summer break that LSSAT’s nine schools soon will be handed to new sponsors while the trust, which is set to be wound up later this year, faces an ongoing investigation by the Education Funding Agency (EFA) into its governance and finances.

The trust’s revised accounts show in a section on related-party transactions that Jane Fielding, Averre-Benson’s wife and trust co-founder, received at least £105,000 in her role as managing director.

Averre-Beeson’s daughter, Victoria Rezaie, was also employed by the trust, receiving a salary of £63,298. She is listed on the school’s website as principal at Thistle Hill academy in Kent.

Another daughter, Samantha Busch, was employed by LSSAT for £16,593. The trust bought computer equipment worth £390 that was delivered to her home address.

An independent accountant expressed concern in the report that Averre-Beeson was the trust’s internal auditor as well as chief executive during 2014-15, and said there was not enough conclusive evidence that compensation payments totalling £249,107 made to 11 employees were in line with EFA regulations.

Schools Week revealed last month that private consultancy firms run by the founders of LSSAT had received more than £1 million in the past two years. The EFA and a regional schools commissioner intervened to block the trust from buying more consultancy services from its founders.

The most recent accounts also show Lilac Sky Outstanding Education Services Ltd – another company in which Averre-Beeson has a controlling interest – provided services worth £271,742 to the academy trust.

The company changed its name to Lilac Sky Education Ltd in July and has now been rebranded as Education 101 Outstanding Education Services. Averre-Beeson said the companies had been renamed “to avoid any additional confusion” with the Lilac Sky Schools Academy Trust, which he stepped down from the CEO post in March last year and later relinquished his trustee position.

He added: ‘Lilac Sky Schools Ltd set up LSSAT in 2012. For some time, as was originally envisaged and discussed with the Department for Education, Lilac Sky Schools Ltd and its sister company Lilac Sky Outstanding Education Services Ltd provided central services, training and coaching, and leadership support to LSSAT’s schools under contract.

“All services were charged at cost and recorded, publicly documented and reported to the EFA and DfE. We recognised in 2015, however, that some procurement processes should have been more formal and the governance arrangements between trust and companies more independent and robust.”

Averre-Beeson said he left the post to ensure there were no further potential conflicts of interest.