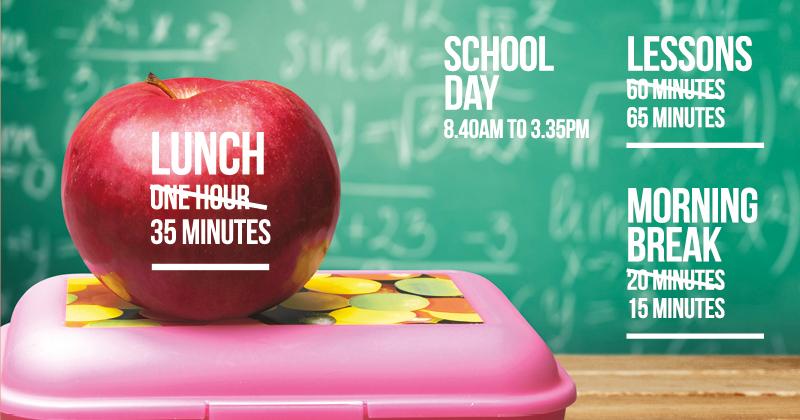 An academy’s plans to slash its lunchtime break and extend the school day is the latest example of a revamped timetable following the introduction of the new “big fat” GCSEs.

Ashlawn School, a partially selective academy in Rugby, told parents the timetable changes have been proposed to “meet the challenges” of the reformed GCSEs and linear A-levels.

Many schools are toying with timetable changes as a result of the more “rigorous” qualifications. But Ashlawn is unusual in extending the school day while also cutting break times.

Lunch will be cut from one hour to 35 minutes, and a break in the morning will be 15 minutes not 20.

The remodelled year will mean students, particularly in key examination years, will have more time to deepen their learning

But not all parents are happy with the proposals. Tracy Tilley calls them “woefully inadequate”, adding: “Ashlawn is physically a large school [about 1,500 pupils] so it takes time to get to the dining hall. A reduced lunch period will mean the children get no time to socialise, rest or refresh.

“This is surely not good for their mental health and well-being, let alone their ability to concentrate given the longer lessons and longer day. They will effectively have no rest for seven hours.”

Other parents have posted online to say that they are worried cutting lunch time will reduce the school’s ability to run extracurricular activities during the break.

To balance out the increased time in school, Ashlawn is proposing to close one week earlier at the beginning of the summer holidays, giving pupils seven weeks off compared with the standard six – although some parents say they won’t be able to get extra time off to look after their children.

Local-authority maintained schools currently must open to pupils for 190 days each year, with an extra five days for teacher training.

However, academies are free to alter their school year as they please, providing it complies with funding agreements.

As reported by Schools Week last month, an academy trust in Gainsborough cut the traditional six-week summer break by one week, adding an extra week’s holiday elsewhere to the school year. It later abandoned the idea after a rise in unauthorised absences.

Tall Oaks Trust made the change to allow parents to go on holiday outside the peak season, but it caused problems for those with children at different schools as holiday dates no longer aligned.

In a letter to parents, Ashlawn said the remodelled year “will mean that students, particularly in the key examination years, will have more time to deepen their learning and increase their levels of achievement and progress”.

A school spokesperson said a consultation on changes had closed and responses would be analysed before a final decision was made. The concerns of parents would be addressed.

Unions told Schools Week that headteachers were best placed to make decisions on the school day.