About 1,000 high-attaining primary schools are missing out on top GCSE grades, while their richer peers with the same prior attainment are pulling ahead.

Just over half of poorer pupils who were within the top 10 per cent of key stage 2 scores in English and maths at primary school went on to get top grades at GCSE, compared with nearly three quarters of their wealthier counterparts.

Research from the Sutton Trust reveals that only 52 per cent of pupils eligible for free school meals with top scores in primary school got five A* to A grades at GCSE, compared with almost 72 per cent of other pupils with the same prior attainment.

This means that 1,000 pupils who did exceptionally well at the end of primary school are missing out on top GCSE grades just five years later.

The researchers, who analysed data from the National Pupil Database over three years from 2014 to 2016, also found a correlation between the type and characteristics of the schools that pupils attend, and their GCSE scores.

High-attaining poorer pupils do better in schools in London, for instance, and worst in the East Midlands.

High-attaining pupils on free school meals in the capital score 521 points at GCSE on average, compared with 476 in the East Midlands.

The largest gap between the scores of poorer high-attaining pupils and others was in Yorkshire and the Humber, at 40 points or 7.6 per cent. 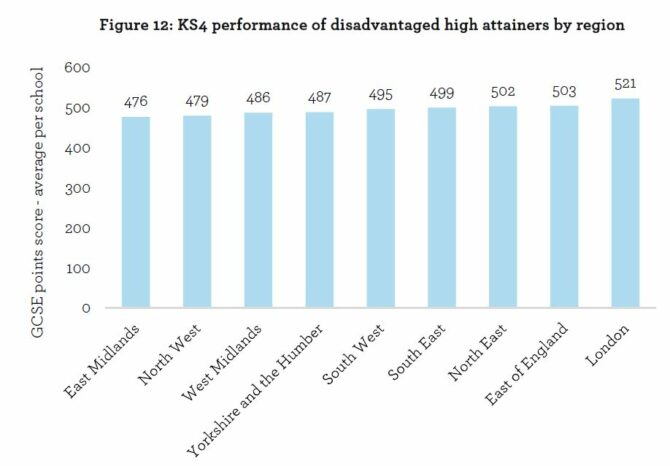 But the findings run counter to the claims of those who say grammar schools help the “bright poor” to achieve.

Even though about half of all pupils in grammar schools were in the top 10 per cent at key stage 2, compared with just eight per cent in comprehensive schools, only a tiny proportion of these are from poorer backgrounds.

Sir Peter Lampl, founder of the Sutton Trust, said better evidence on how to improve the attainment of “disadvantaged, highly able students” is needed.