The proportion of A* and A grades has stayed the same this year at 26.2 per cent. Last year, it rose by 0.4 percentage points which was the first hike since 2011.

On the other hand, the overall pass rate is down a tiny amount by 0.3 percentage points – meaning 97.6 per cent of entries receive at least an E grade.

This means overall pass rates are down by 0.5 percentage points compared to two years ago.

*Note: these figures are England only. Across the UK the picture was a little more rosy. 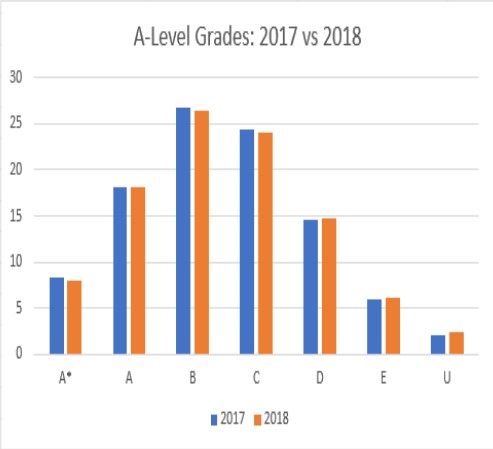 For the third year in a row the 10 most popular A-level subjects are exactly the same.

There was a slight change in order at the bottom of the table with geography slipping below physics and sociology.

Maths remained the nation’s favourite subject, with a slight rise in entries (2.5 per cent).

Computing also continues to rise in popularity (another 23.9% increase – though from a blow base), and business studies is  having a resurgence with a 9.5 per cent increase in entries in one year.

This year ICT and religious studies had a dramatic fall – with 25.8 and 21.3 per cent respective drops.

ICT has been on the decline since the shift to computing. Much will be made of the idea that religious studies is dropping due to its exclusion from the ‘facilitating subjects list, but English language and English literature also continued their decreasing popularity this year – down by 14.8 and 12.5 per cent.

Geography also dropped by 11.3 per cent – despite its facilitating subject status.

Computing continues to have a high gender gap though things are getting marginally better as girls this year made up 11.7 per cent of the cohort – last year they were just 9.4 per cent. (Girls also achieved higher than boys in a reversal of last year – see below).

For reference, ICT – the subject precursor of computing, which is being reduced by the government – had female candidates as 28 per cent of entries.

Boys are worse off in a range of subject such as English Literature, English Language, and Art & Design, which are over 70 per cent female.

5. Which subjects do male and female candidates do best in?

This year, 8.5 per cent of male candidates gained an A* compared with last year when it was 8.9 per cent. This puts the score back to where it was in 2016.

The proportion of female candidates also dropped this year, down to 7.6 per cent from 7.7 per cent.

However, girls do better across As, BCs and Cs, meaning that around 78 per cent get one of these grades. Only 75 per cent of boys achieve the same.