An academy trust that opened from scratch with 10 schools has been rapped for spending thousands of pounds on adverts in a lifestyle magazine and on staff events, including one at a five-star “luxury” spa hotel.

A 2019 piece in the magazine interviewing trust chief executive Anna Coulson and trust chair Nik Tunley had a “focus on them personally rather than on their role within the trust”, the report said. Questions included what their favourite food, clothes and holidays were.

There was no obvious link for school advertising

Schools Week revealed last year that the trust had been investigated by the Education Skills and Funding Agency just 14 months after opening in 2018 with 10 schools, based in the Redcar and Cleveland.

Despite investigators visiting in June 2019, the report has only been published today.

The ESFA found academy rules were breached and concluded the trust had “weak internal controls [over] procurement, recruitment and selection processes”.

Payments to firms linked to trustees and irregular spending on gifts were also flagged. However, names of those cited in the report, and any mentions of firms they run, have been redacted.

‘No rationale’ for spending on ‘luxury’ venues

The trust held a meeting in October 2018 at a “five-star luxury golf and spa hotel” costing £1,575, with £175 for conference tea and coffee. A list showed the meeting had just 25 attendees, although Coulson claimed “approximately 75 delegates” attended.

The trust also spent over £900 at a Christmas meal for central team staff and trustees at a local restaurant, including £241.65 on alcohol. However, attendees paid the money back.

An amount of £55 was outstanding at the time of the investigation, with “no monies” received from Tunley. That money has since been received.

The ESFA said there was “no documented rationale” for hiring venues for meetings. Some expenditure didn’t represent value for money as the trust had access to meeting rooms on site.

The report also found £3,236.44 was spent on adverts in local lifestyle magazine Luxe, described as a “combination of high fashion, on-trend interiors and the best in food, travel, beauty, motoring and more”. 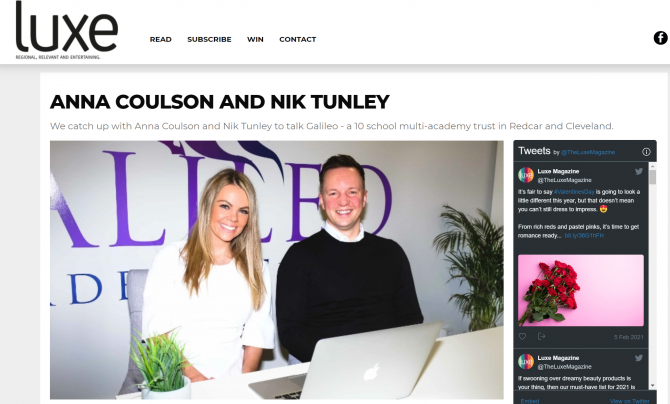 “There was no obvious link for school advertising,” the ESFA stated. “A tweet by the trust about an article in the May/June 2019 issue of featured interviews with the CEO and chair. The interviews focus on them personally rather than on their role within the trust.”

Interview questions for the piece (pictured) included what their favourite items of clothes were, their best shopping city and their best location to spend a weekend.

Coulson said they chose this magazine as “they felt it reached a wider audience and was more suited to promoting the trust to local parents, in addition to attracting trustees with a business background”.

But the ESFA said the trust could not provide a documented rationale.

The ESFA was tipped off to concerns over a guest speaker at an event, however this allegation was not upheld.

Investigators found that invoices totalling £20,062.22 were sent to Galileo for payment.

However, the bill was passed on to the Landmark Teaching School Alliance for payment. Coulson was previously a director at the teaching school alliance, which was made up of the schools that went on to form Galileo.

An amazing day. Our CEO @AnnaCoulsonCEO interviewing the ever inspirational Sir Bradley Wiggins. Thank you, @SirWiggo for being so motivating for the school leaders in our area. pic.twitter.com/0UqD2YZLA7

A flyer for the event, tweeted by Galileo trust in April 2018, states it was for a “Power of Positive Leadership in Education” event. Attendance for alliance delegates was £125 and £150 for non-members.

Contracts to linked firms and £400 on taxis for CEO

The report also flagged that costing information over a catering contract had been “shared inappropriately” with a “preferred new supplier”. A trustee, whose firm won the tender, was “involved in initial catering discussions and did not resign until after [redacted] had been notified their tender was successful”.

The report added: “Given the trust’s clear intentions to enter into an agreement with [redacted] this demonstrates a conflict of interest.”

Neither the trustee nor the firm were named.

Investigators found an email from the trustee, also chair of the finance, audit and risk committee, to Coulson’s personal assistant requesting “some admin tasks, including ‘send rejection letters to the other accountants (re the DD)’.

“This suggests that trustee 2 was involved in the tender process for the due diligence contract which was awarded to [the firm he’s a director at].”

The report also states a solicitors firm, which listed chair Tunley as a member, was paid to incorporate the trust and convert schools.

Investigators found no evidence of an invitation to tender. A lack on documentation and a “failure to consistently declare interests” on the contracts meant funding rules had been breached, the report ruled.

Investigators also found “irregular expenditure” including £229.50 for a training course for three counsellors/therapists who were not trust employees.

Also, £401.54 was spent on 23 taxi rides in London by the chief executive. The majority of these were between 8am and 6pm, despite the trust policy stating taxi costs will be paid “for journeys at anti-social hours where staff normally use public transport”.

CEO ‘proud of her work’

Coulson told Schools Week: “I remain proud of the work that I did at Galileo. There are a lot of hardworking people in the trust and all of the children are truly wonderful. I wish them all the best in the future.”

Annual accounts show her salary was £80,000 which is likely to be among the lowest in the country for a multi-academy trust with ten or more schools.

None of the nine trustees for Galileo listed in its first annual accounts for the year ending August 31, 2018 – including former England rugby league captain Jamie Peacock – are still in position.

Last year, experienced education practitioner Les Walton was appointed as interim chair. He told Schools Week all the issues in the report have now been dealt with. A new board of trustees and chief executive have also been appointed.

He added: “The prime concern of the Galileo Trust Board is to ensure the best interests of the children within the Trust are met. That is our main focus today.

“Now we have a new team at the helm to drive change, we can look positively towards the future, ensuring that the Galileo Multi-Academy Trust goes from strength to strength.”