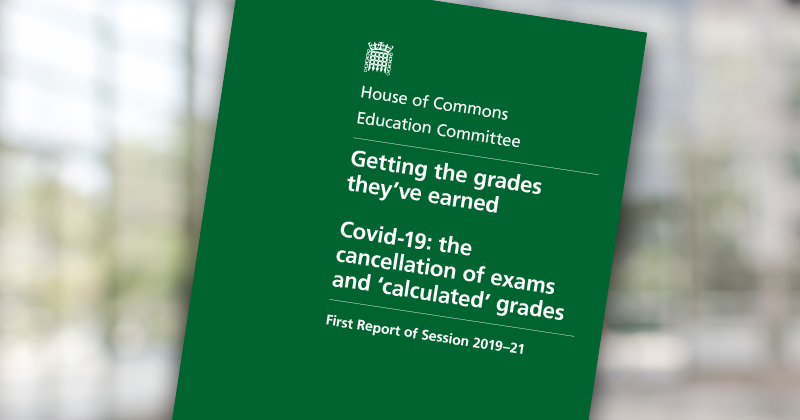 The education select committee has published a new report on this year’s grading system, titled ‘Getting the grades they’ve earned: Covid-19’.

It warns that young people from disadvantaged backgrounds risk missing out on the results they deserve because of inaccuracy and bias in Ofqual’s grading system (check out our news story here).

Here’s what the committee wants the regulator to do to resolve the issues.

The committee is “extremely concerned” the standardisation model “does not appear to include any mechanism to identify whether groups such as BAME pupils, FSM-eligible pupils, looked-after children and pupils with SEND have been systematically disadvantaged by calculated grades”.

“Given the potential risks of bias in calculated grades, it is clear that standardisation will be a crucial part of ensuring fairness,” the report added.

The regulator has been called-on to make a “transparency guarantee” and publish the standardisation model “immediately to allow time for scrutiny”. This should include an explanatory memorandum on decision and assumptions made during the model’s development.

“This should include clearly setting out how it has ensured fairness for schools without three years of historic data, and for settings with small, variable cohorts,” the report added.

As revealed by Schools Week yesterday, Ofqual won’t be publishing details for how it will moderate grades for new free schools without historic outcomes.

But the committee added Ofqual “should not be afraid of scrutiny or open debate over whether its model offers the fairest outcome for every pupil and provider”.

The committee has also called on the regulator to identify where there’s evidence pupils have been “systemically disadvantaged”, and if so, the standardisation model must adject the grades of those affected upwards.

2. …and publish the evidence threshold for proving bias

MPs welcomed that pupils can appeal their grade if they believe bias or discrimination has occurred.

But they are concerned “not enough thought” has been given to making the route “accessible to all pupils”.

“Without support, proving bias or discrimination would be an almost impossible threshold for any pupil to evidence,” the report added. “Disadvantaged pupils, and those without family resources or wider support, risk being shut out of this route.”

MPs want Ofqual to “urgently publish the evidence thresholds for proving bias and discrimination, clearly setting out what evidence will be required”.

That should include case studies and be communicated to parents and pupils in advance of results day, they said.

The report added: “It is unrealistic and unfair to put the onus on pupils to have, or to be able to gather, evidence of bias or discrimination. Such a system also favours more affluent pupils and families with resources and knowledge of the system.”

MPs suggested that where SEND pupils have concerns with their grade, they “must be allowed to see the evidence” used by teachers to come up with the calculated grade. This would include past work or mock exams, the report stated.

If appropriate access arrangements were not in place for such work, or the school did not use evidence from SEND specialists if appropriate, then the pupil “must be allowed to appeal on the basis of malpractice or maladministration”.

MPs want “gold-standard” advice and support that’s “easily accessible for all pupils unhappy with their grades”. Ofqual and the National Careers Service have promised phonelines, and the committee has said these must be free to use and staffed by trained professionals.

The committee also called on Ofqual to publish guidance for schools about the appeal options available.

Ofqual has said it will provide specially-trained staff for the helplines and do all it can to “help students and their families understand how to access an appeal or make a complaint about bias, discrimination, or another concern”.

5. Government must not ‘wash its hands’ of autumn resit pupils

The committee said it supports proposals to delay exams next year as “preferable to modifications to exam content”.

The report added that “fairness and accessibility must be the guiding principles of an autumn exam series”.

“Having directed Ofqual to provide pupils with ‘an opportunity to sit an exam at the earliest reasonable opportunity’, the department must not now wash its hands of further responsibility.”

The government must provide guidance for schools outlining minimum requirements for provision of teaching support for pupils opting for an autumn exam. “The Department must support schools and colleges to manage the logistics of this series, providing concrete solutions on how the burden of an additional series can be minimised,” the report added.