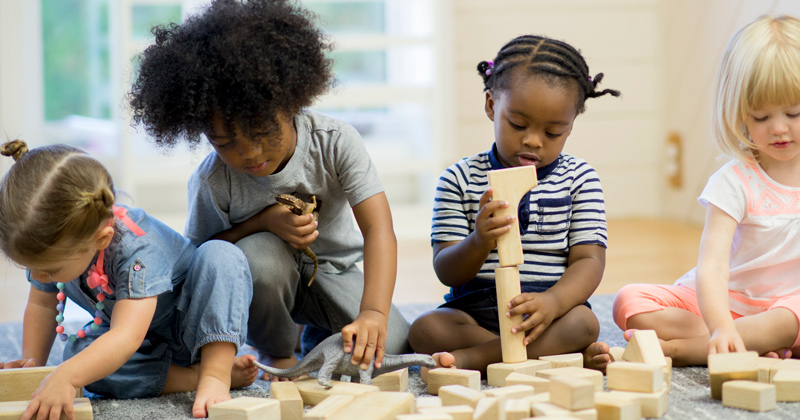 The government’s plan to give working parents access to up to 30 hours of free childcare every week risks increasing the gap in school readiness between disadvantaged children and their peers, the Sutton Trust has warned.

A new report claims the decision not to extend the childcare offer for 3 and 4-year-olds to non-working parents is “ill-advised”, and wants the policy reversed.

Under plans announced by the last government, working parents are now entitled to double the standard 15 hours of free weekly childcare that is available universally.

Justine Greening said it will save parents up to £5,000 a year, and “make a real difference to families’ lives”.

But in its latest report, ‘Closing Gaps Early’, the trust said the government is focusing on the quantity of childcare rather than its quality, when children from poorer backgrounds are most at risk from deteriorating standards and falling behind when starting school.

There is still a “substantial gap” between the prospects of less well-off children and their more advantaged classmates by the time they start school, the report says.

This gap “continues to widen throughout the school years” and it is therefore “essential we close it early so children can begin their formal education on a level playing field”.

Earlier this month, a survey by the National Association of Head Teachers revealed that 80 per cent of school leaders said many children arriving at primary school were not ready for classroom activities. And 86 per cent of these were concerned that children’s school readiness is worse now than five years ago.

The trust’s latest research condemns the “devastating consequences” of welfare reforms for disadvantaged families, and said they could undermine work to decrease the school readiness gap.

The report says children at a greater risk of starting school at a disadvantage have the most to gain from early education, and that research has found increased benefits for children whose parents have lower incomes or lower levels of education, or whose first language is not English.

“There is no justification for reducing financial support for families with young children if the aim is to narrow gaps in child development and break the intergenerational cycle of poverty,” the report said.

Sir Peter Lampl, the trust’s chair, said it was understandable that the government wanted to “improve access to childcare for working parents”. However this “must not be at the expense” of good early education for disadvantaged children, he said.

“Focusing on getting it right for the poorest 2 and 3-year-olds would make a much bigger difference to social mobility, by improving their chances at school and in later life” he said.

Paul Whiteman, the general secretary of the NAHT, said: “We want to see extra money for education, including early education before children start school, and renewed investment in critical services for families.

“Without proper investment, the youngest and most vulnerable in our society will be starting off behind, with uncertain chances of catching up.”

Whiteman also wants the early-years pupil premium to be set at £1,300, the same level as is given to primary schools, rather than its current rate of £300.

A government spokesperson said that alongside the 30 hours offer, it was spending “over £2.5bn on free childcare for disadvantaged 2-year-olds over five years”, as well as providing “extra support for disadvantaged families through the early years pupil premium”.

“Our independent evaluation of the early delivery areas showed that 30 hours did not have any significant adverse effects on the 2 year old offer.

“This evaluation also showed the 30 hours offer supported families by taking huge pressure off their finances and helping them increase their working hours. ”