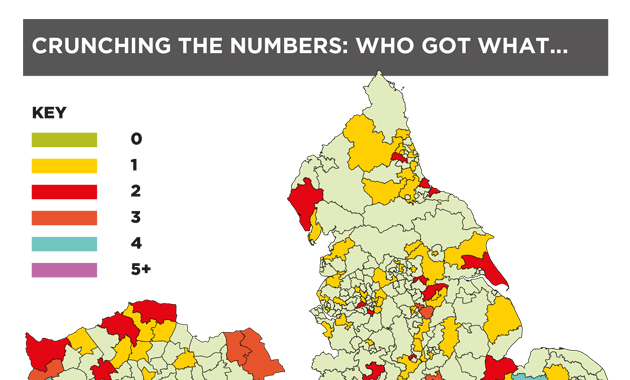 Schools in the constituencies of Conservative and Liberal Democrat MPs are the biggest winners in the latest release of funds for the Priority School Building Programme.

Monday’s announcement of the schools that will benefit from the £2bn second wave of the programme has led to accusations that the government is abusing its power.

But the Education Funding Agency in its methodology document for the selection of successful schools in phase two of the PSBP, says that schools getting the funds were those in the worst condition, where their continued operation was most at risk and where the cost of addressing individual projects was so significant that it would be difficult to pay for them through regular school condition allocations.

Analysis by Schools Week shows that almost 70 per cent are in constituencies represented by government MPs.

In total, 175 of the 277 schools named are in Conservative-held constituencies and 18 are in Lib Dem-held electorates. Eighty-eight schools in areas represented by Labour MPs will get funding.

In many cases, money has been allocated to schools in constituencies where Conservative or Lib Dem candidates face tough battles on May 7, either in seats
where they currently hold wafer-thin majorities or in unsafe Labour seats they are hoping to gain.

Three schools in North Warwickshire, held by Dan Byles for the Tories with a 54-vote majority, have been allocated funding. Mr Byles is standing down at this election. Money has also been promised to schools in Thurrock, won by Tory Jackie Doyle-Price by 92 votes and in Brent Central, where the Lib Dems will be defending a 1,345 majority. Current MP and former children’s minister Sarah Teather steps down this May.

Labour seats where funding has been allocated include Birmingham Edgbaston, won by Gisela Stuart with a majority of 1,274 in 2010 and where three schools will benefit, and Southampton Itchen, where Labour candidate Rowenna Davis will be trying to hang on to incumbent MP John Denham’s majority, just 192 at the last election.

The figures come in the wake of the cancellation of Labour’s £55 billion Building Schools for the Future (BSF) programme to rebuild, refurbish and provide new information technology for all 3,500 secondary schools in England by 2020.

Michael Gove scrapped the programme weeks after he became education secretary in 2010. About 700 building schemes were cancelled. Fifty-seven per cent of the scrapped projects were in Labour constituencies – among them 11 in Holborn and St Pancras in London –37 per cent in Conservative and 6 per cent in Lib Dem.

Mr Gove told the Commons at the time that he was dropping BSF because of “massive overspends” and “needless bureaucracy”.

But a report drawn up by Partnerships for Schools, the quango that oversaw the BSF programme, showed BSF had a positive impact on students’ outcomes. Disclosed in 2012 following a Freedom of Information request, the report found that GCSE results were improving ahead of the national average in 62 per cent of the schools sampled, and that attendance had improved at
73 per cent.

The details of the Priority School Building Programme allocations have sparked criticism from teaching unions. Chris Keates, general secretary of the NASUWT, said: “What is surprising is that anyone would be surprised that the coalition government has sought to abuse its position to give itself an advantage in the forthcoming general election.”

National Union of Teachers general secretary Christine Blower said: “All children deserve the same benefits and funding wherever they are in the country and whoever their MP is. Ending the BSF programme was a grave mistake.”

Announcing the second wave on Monday, education secretary Nicky Morgan said: “As part of our long-term economic plan, we have continued to invest in school buildings, which will ensure we can deliver even more great new schools, transform the learning environment for tens of thousands of pupils and their teachers whilst delivering value for money for the taxpayer.”

Deputy prime minister Nick Clegg said: “It is crucial that we invest properly in education, so that every child has a fair start in life. Thousands of pupils will benefit from better, brighter, warmer classrooms thanks to this funding.”

When Shadow education secretary Tristram Hunt was asked by Schools Week what he thought about almost 70 per cent of government constituencies receiving money, he said: “I’ll have to look at the figures closely, but there have been allegations over a number of years now of pork barrel politics from this government, the number of ski lifts in Danny Alexander’s constituency seem remarkable, so we will look into this.”

A DfE spokesperson said: “The Priority School Building Programme is transforming the learning environment for tens of thousands of pupils and teachers while delivering value for money for the taxpayer. Over the course of this Parliament the Government is spending a total of £18 billion on school buildings and new school places.

“Funding allocations for phase 2 of PSBP were based on the Property Data Survey, the most comprehensive survey of its type ever undertaken. This allowed us to compare need across individual buildings and target funding where need was the most acute. It is nonsense to suggest it was allocated on any other basis.”

In the first wave of the PSBP, 260 schools received capital funding of £2.4bn, according to a Department for Education spokesperson. He added that by the end of January, “16 school buildings are already open, 55 are under construction and the remaining projects are well into the development or planning stages”. The government said in July 2014 that the first wave of schools would be delivered by the end of 2017.