The government has named and shamed 23 academy trusts that were late in submitting financial returns in the last academic year.

Trusts were supposed to have their land and buildings collection tool sent off by November 4 last year, and financial statements were supposed to follow on December 31, with accounts returns due on January 20. The deadlines therefore pre-date school closures associated with the coronavirus pandemic.

The DfE said these had been taken out of scope “having been impacted by the effects of Covid-19”. Last year, seven of the 43 trusts named and shamed were included for failing to submit one or both of the budget outturns.

The Alpha Trust, Falmouth MAT, Hawes Side Academy and Cedars Academy Trust all submitted their accounts return and land and buildings collection tools late, while all the other trusts on the list were late with their financial statements and accounts return.

The DfE said today that the “vast majority of academy trusts submitted their financial returns on time”.

“But in order to improve compliance with the submission deadlines, and in fairness to the trusts who do submit their returns on time, we have a policy of naming those academy trusts who were late with two or more of the above deadlines.”

The Education and Skills Funding Agency announced last month that this year’s deadlines for financial returns would be extended in recognition of “challenges” presented by Covid-19.

It is not yet known whether trusts will be named and shamed for missing the next deadlines.

Please note this article has been updated to correct an error made by the DfE in its initial publication. 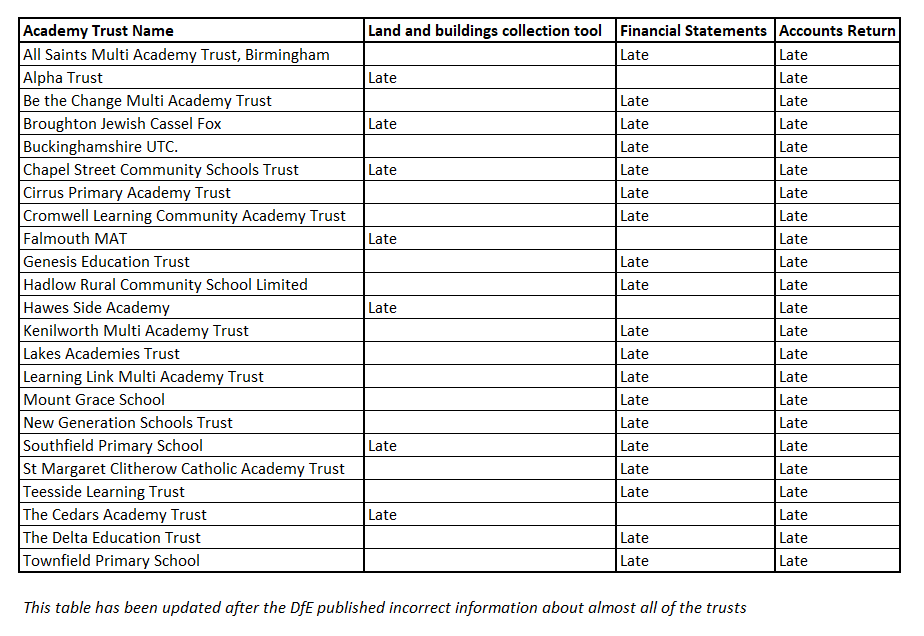