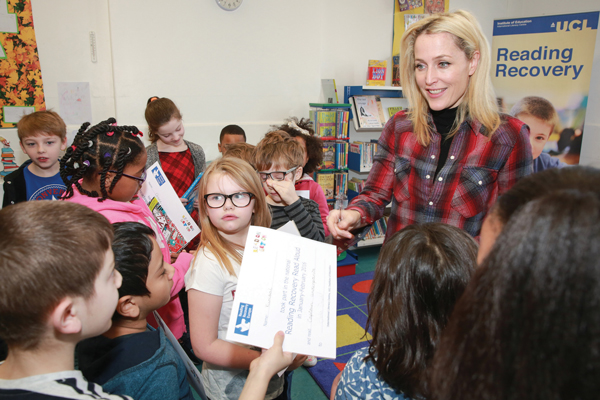 Gillian Anderson listened to reading demonstrations from pupils at the William Tyndale Primary School in Islington to launch this year’s Read Aloud campaign.

The X-Files star was joined by the president and provost of UCL, Michael Arthur, and interim director of the Institute of Education Professor Andrew Brown.

Read Aloud is a reading recovery programme designed to raise awareness of children’s literacy issues. It is being led by the International Literacy Centre.

The footballer Gareth Bale and journalist Janet Street-Porter are also supporting the campaign.

The programme will run throughout February with a series of events, continuing into March when the chief executive of ITV, Adam Crozier will listen to children read at a television studio.

Ms Anderson said: “It’s an honour to be able to support Reading Recovery Read Aloud, and to witness first-hand how children such as those at William Tyndale Primary School have benefited from the work done by the ILC.

“These children have not just learned to read, they now have the confidence to let their voices be heard.”

Responses to The Special One