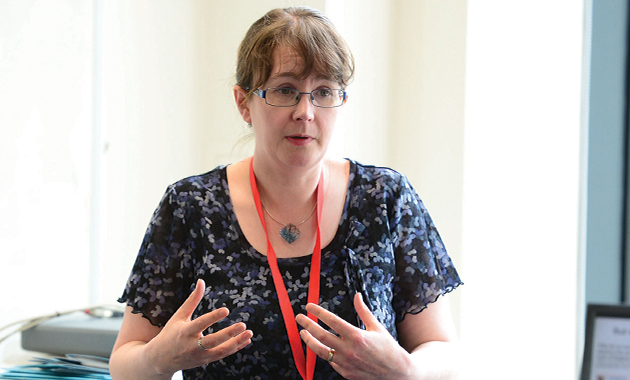 Dr Davenport (pictured), director of Think Physics at Northumbria University, told the conference the constant newspaper reports of the need for scientists and engineers was concerning as both professions worked in vital industries. “Engineering turnover was £1.3 trillion in the year ending March 2012 and 5.4 million were working in engineering enterprises. That’s 19.5 per cent of the working population.”

Physics is currently the eighth most popular A-level in England – in 2014 that meant more than 37,000 pupils would sit the exam. However, with maths nearly reaching 90,000 entries, there was potential for growth.

Graphs revealed the gender gap in the subject. While nearly 30,000 boys each year studied it to A-level, only roughly 8,000 girls did so. “Between GCSEs and A-level there is a huge drop in the number of students doing the subject. Why?”

What jobs or degrees will studying A-level physics stop you doing? There are none.”

One hypothesis was that it followed poorer results from girls in GCSE physics. “If we assume that a student will have to get at least a B at GCSE to progress on to A-level, then can we see a difference in the number of girls getting the top grades compared with the number of boys,” she said.

More pragmatically, however, she asked what percentage of physics students ought a school aim to get into their classrooms?

Independent single-sex girls’ schools had the highest number of physics learners, with an average of 7.2 per cent in each year group. But even this level, Dr Davenport explained, “would only lead to a class of 20 having five girls and 15 boys in it”.

Solutions for the gap included reductions in stereotyping, strong careers advice, linking curriculum to careers, and breaking the link between “science” as only helping students become “scientists”.

Dr Davenport also suggested reminding students of one killer fact. “What jobs or degrees will studying A-level physics stop you doing? There are none.”