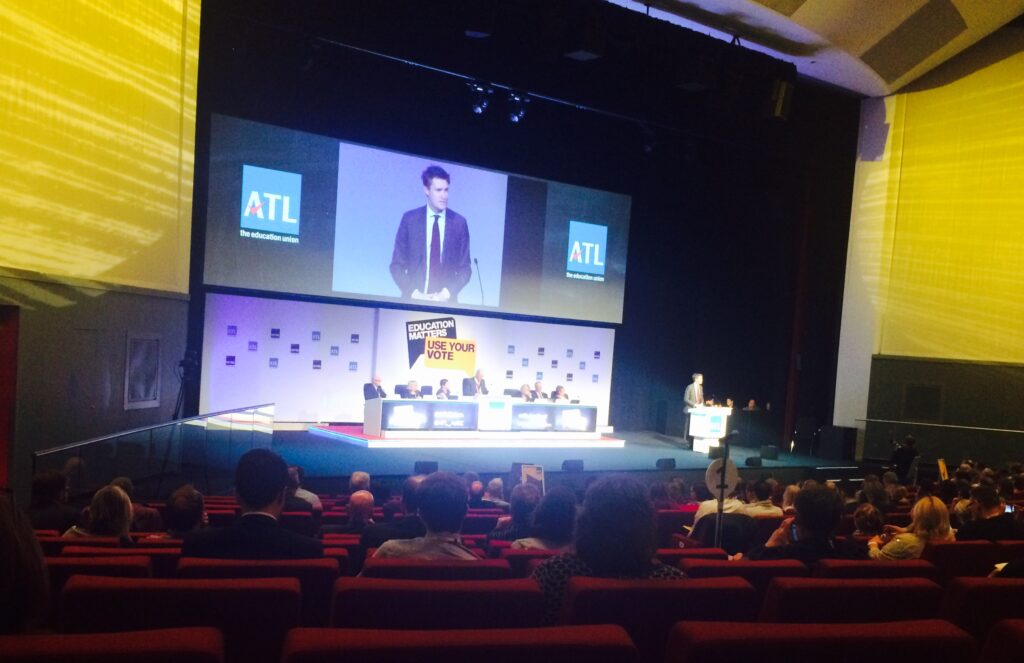 I spent six years as a teacher and never once went to a teacher union conference. In fact, the thought terrified me.

My imagined version was of massive, bingo-style halls in which crotchety teachers leapt up complaining about the worst parts of the job. I’d spent four half-terms battling forgotten homeworks and playground fights – why would I give up my Easter holidays for that?

As I pull up at Liverpool’s sea-fronted conference centre to attend ATL’s annual endeavour it is raining, hideously. The entrance hall is impersonal. Not good.

The conference hall is dark, somber, bingo-like. The displayed motion is ‘death by a thousand cuts’.

And yet… slowly… it starts to metamorphose.

The chair, Mark Baker, is calm, sensitive, moves along with the right level of dignity.

At one point he admits that an earlier flippant comment has upset people. He apologises and moves on. No flagellation or anger. Just, niceness.

As he walks to the podium, flailing his spiderlike limbs, I roll my eyes and brace for disappointment.

It’s a union hall, he’s a Labour politician, one might not expect a rough crowd. But Labour edu-chiefs have left union halls in pieces before now. Members may be mostly red, but they’re not push-overs.

Hunt nevertheless appears on startling form. Riding Ed’s “hell yeah” wave he has gumption and passion. A bit heavy on history, too light on policies, there’s a lot of “I want, I want” and not much “I’m going to” but he’s hitting all the right notes and the crowd are sucked in, baying for more…

And then, there it is. The announcement that over the next Parliament, Labour would support a move towards a peer-review Ofsted system.

The person next to me says “Wow!” – out loud – and begins clapping. He’s not alone. Warmed up, the audience become responsive – as if a at a rock concert. Laughter at the idea of budget protections, clapping at the end of free schools, Gove’s name dodges a hiss but gains visible headshaking.

Afterwards, I amble into a hallway conversation among three young people. A primary teacher, a secondary department lead, and an education consultant. The primary teacher is happy Hunt mentioned poverty, the secondary teacher excited about trust in the profession, the consultant pleased about  comments on a ‘digital revolution’. All surprised he did well.

In the coffee line I find myself next to Mark Baker, the president. During a motion about zero hour contracts I’d got lost in shenanigans about an amendment, and when Baker had announced the vote was a tie (187 to 187) I wasn’t sure what that meant.

He explained, in characteristic humble Rochdale tones, that he’d had the casting vote and he’d decided the amendment had passed, meaning a line from the original motion had been scrapped. It sounded sensible, and not too hard to fathom. At the end of the line I received a nice cup of coffee and a flapjack.

This wasn’t too bad, at all.

The day wore on – motions in the hall, teachers taking the stand, stories shared, votes passed.

In the corridor, teachers discussed all manner of issues. There were chats about Scottish teaching, and Ofsted. Tests for four year olds, and Ofsted. The reluctance of government to talk about special needs, and more Ofsted. For those who read social networks, it was like Twitter – but live.

Fears that motions would be despondent bore out, but when hearing the stories, it became obvious why.

The hall was silent as Rod Bissett, from Birmingham, described his own depression and how it affected his career. He explained how a colleague with a physical disability had adaptations made for her but a colleague suffering panic attacks was told to pull herself together.

“That is not taking her illness seriously,” he said.

Alison Sherratt, a member of ATL’s executive committee, described the exhaustion she felt as a carer to elderly parents, while also looking after her three daughters – each at precarious points in their education – and trying to keep up with a senior school position.

“And then the menopause,” she sighed, “with all its health implications”.

Story after story of people struggling. Outside, the rain kept falling.

As I walked away at the end of the day I wondered whether giving up part of your holiday to share in such misery is worth it.

But it’s important to remember that the discussions are followed by votes. And those votes are for motions that urge change. Maybe the resolution asks union leaders to raise a debate, or push for change, or make a promise. Painful though the debate is, it’s not without purpose. It shines light on the realities of teaching and in doing so persuades people to support real change.

Union membership isn’t to everyone’s taste, in the same way that working in a free school, or being of the Territorial Army isn’t. Attending conference, equally so.

I also hear that ATL is somewhat different to other unions in that their motions are speedier, with fewer factions and aggressiveness. This may or may not be true. It would be useful to hear in the comments.

In the end, what it was, is a lot less scary or pointless than I expected or hadbeen led to believe. Even in the rain, optimism shone through. I wonder if it still will next year.