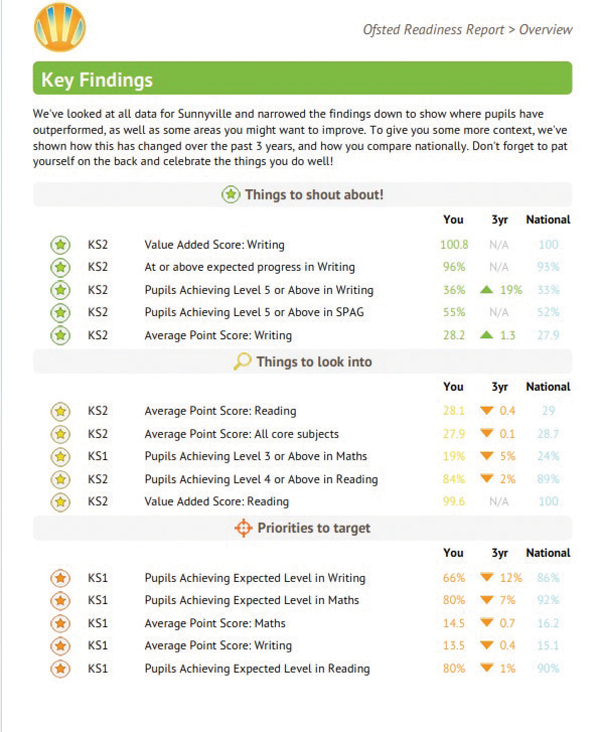 A new programme claims to predict the grade a school would score in an Ofsted inspection . . . in just 20 seconds.

Data experts have developed an algorithm that crunches thousands of figures used by the government to measures a school’s performance and converts it into their likely Ofsted grade.

Developers say the programme will increase accountability and transparency in inspections – making schools more data smart and handing them more clout in analysing their grade.

James Weatherill, co-founder of Arbor Education Partners that developed the programme, said: “Schools have a lot of data but it is incredibly siloed. A lot of time is spent extracting it rather than looking at it – there is an enormous amount of time spent on administrative bureaucracy.

“This report analyses the information and presents it back to schools so they can learn from it. This does three things – makes information understandable, saves time and provides insight.”

It makes management information systems for schools by pulling together official Government figures, including for the census and school performance tables.

The algorithm reviews 15 million school data points from Department for Education figures and compares them to more than 7,000 Ofsted inspections last year.

The pair analysed data from schools rated as good and outstanding to create benchmarks showing where each school outperformed and how they could improve.

Launched in November, so far 1,200 schools have paid for a report. It costs £150 for primary schools and £200 for secondary schools.

Mr Weatherill added: “Data is presented to schools in a top down way – Ofsted has all the information. We’re trying rebalance that.

“It’s the same information inspectors would see before they go into a school. It can tell you where you need to focus your time.”

Schools Week reported last week that Suffolk executive headteacher Geoff Barton had lodged a complaint to Ofsted after he claimed an inspector said his school’s behaviour grade was limited by its low attainment grade.

Mr Barton complained about the lack of transparency from the education watchdog during the whole process.

Mr Weatherill said that the new reporting tool increased the transparency of judgment: “We’ve seen a high variability in judgments, with two schools on the same data, but one is good and one is outstanding.

“The school has this data so they can then ask ‘why is that?’”

An Ofsted spokesperson said: “During an inspection, in addition to analysing test and exam data, inspectors gather a wide range of evidence including from observing classroom teaching, looking through pupils’ work, seeing how pupils behave in the school and talking directly with pupils, teachers and senior leaders.

“Therefore, published data alone does not determine the inspection grade, or indeed whether pupils are receiving a decent education.

“The best way for senior leaders to prepare for inspection is to run a good school.”