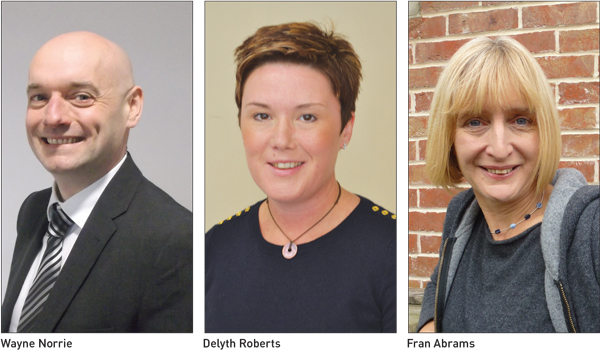 Wayne Norrie will take over as chief executive of the Greenwood Dale Foundation Trust (GDFT) from January 1.

He is currently an executive principal at the GDFT where he oversees quality assurance and supports nine of the trust’s academies in Northamptonshire. He was formerly a senior HMI inspector responsible for the East Midlands.

In his new role, Mr Norrie says he will put a lot of emphasis on leadership. “We’re going to look at a teaching school alliance model and development. So the next stage is around leadership development teaching, going for teaching school status and looking at continuing professional development across the curriculum and how we can really support our leaders.”

Mr Norrie completed a geography degree at the University of Leeds.

She has been at the school since 2010 when she joined as an assistant head.

As leader of the school, Ms Roberts says she will put a “big focus” on early years, “making sure the provision is really tight and appropriate for the children coming in”.

She added: “The communication and language aspect of the curriculum really needs to be a focus for us because we have a lot of children who are not rich in language. Plus, many children don’t have English as a first language, so that is really important for us right across the school.

“We’re making sure there are maximum opportunities for the children to talk in and around the environment, and that there is questioning in all areas — with opportunities for answers. We’re also extending pupil thinking with higher thinking questions to push their responses on.”
Ms Roberts studied at Bangor University where she completed a BEd.

Education journalist Fran Abrams takes over from Sue Littlemore as leader of the Education Media Centre, a charity that aims to improve public understanding of education research and evidence.

Over the past 15 years Ms Abrams has been a familiar voice on BBC Radio Four’s investigative programme, File on 4, reporting on education issues including school inspection reforms.

She has more than 25 years’ experience of reporting education and says she joined the Education Media Centre because she is a “huge believer in informing the public discourse on education through the use of evidence.

“Education is one area where evidence is very badly used, where we have a lot of rhetoric and a lot of noise and where quite often people are ignoring the facts because they don’t know about them.

“It is vital to the democratic process that the public generally and policymakers in particular have access to decent evidence when making decisions.”