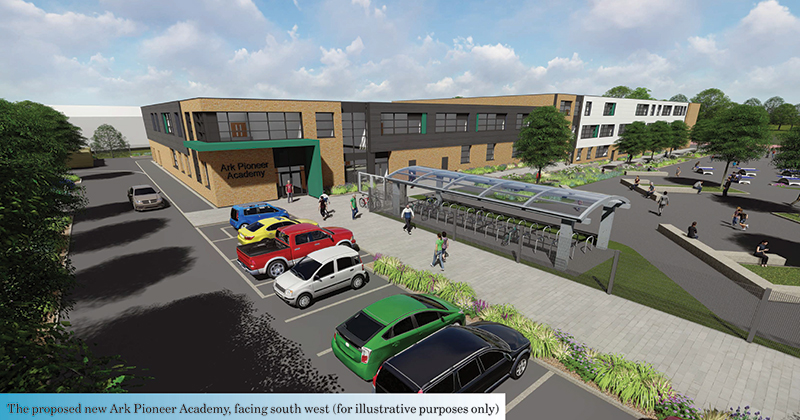 Two of the country’s leading academy trusts have clashed over plans for an “unneeded” free school in north London.

Plans for Ark to build the Ark Pioneer Academy – a secondary school with a sixth form – on the site of the former Underhill Stadium in Barnet are expected to be rubber-stamped soon despite objections from United Learning, which took over the nearby Totteridge Academy in November 2016.

The new school will open in September 2019, and will have 900 secondary and 300 sixth-form places when it reaches full capacity. The Totteridge Academy, a secondary school with 399 unfilled spaces, is located just 0.7 miles away.

Two more secondary free schools with sixth forms – Saracens High School and The Compton School – will also open in the borough this year and next year respectively.

Ark insists the Pioneer Academy is needed to address “the need for additional places in Barnet” that have been identified by Barnet Council and the Department for Education, but in its own analysis, United Learning said there was already a surplus of places in the borough and no need for another secondary school.

Jon Coles, United Learning’s chief executive and a former DfE civil servant, blasted local and national officials over their handling of the case.

It’s a particularly ridiculous place to put a school

“As someone who has worked in public service all my life, I have been dismayed by the poor quality of analysis, communication and basic service to the public which has been seen in this case from local, regional and central government,” he said.

Plans for the new school, submitted jointly by Ark and the government, were initially rejected by Barnet Council in January last year, amid traffic concerns and warnings that it constituted “inappropriate development within the green belt”.

However, updated proposals for the same site, which removed plans for a nursery and primary school, were approved in principle last October, and sent to the London mayor’s office and the communities secretary Sajid Javid for approval.

Last month, the plans were sent back unchallenged to the council to be waved through, and building is expected to begin later this year.

Coles accused the council of an “extremely poor” submission to its own planning committee which “did not demonstrate” a need for places.

Coles said his trust would continue to discuss place-planning in the borough with the council and government “to avoid the waste of public money that an unneeded school would represent”.

He added that the Totteridge Academy had made “stunning progress” over the last 18 months, and said the trust was confident it would be “a school of choice for local parents whatever the competition.”

A spokesperson for Ark said school place projections done by the council and the DfE showed that “even if both schools are full, there will still be a need for additional secondary places in Barnet”.

He added that Ark wants to “work together with all schools in the local area”, and said the trust already had a “positive relationship” with the head of Totteridge Academy, Chris Fairbairn, who was previously the vice principal of Ark Academy in Wembley.

London Assembly member Andrew Dismore has also spoken out, claiming the council supported the school because it feared having to find £30 million to build one itself if the DfE-supported scheme were rejected.

“It’s a particularly ridiculous place to put a school,” he said. “Barnet Council privatised its planning and I think has had a very shabby approach to the whole thing, but there’s nothing you can do now. They’re building it.”

A council spokesperson said councillors had given consideration to “the future demand for school places as well as the lack of alternative sites in the borough”, and had agreed there were “exceptional circumstances to allow development in the green belt”.

“In recent years, a large number of additional primary school places have been provided to keep pace with demand, and as these pupils progress through the school system, we expect to see a significant need for additional secondary places in the next few years,” they added.