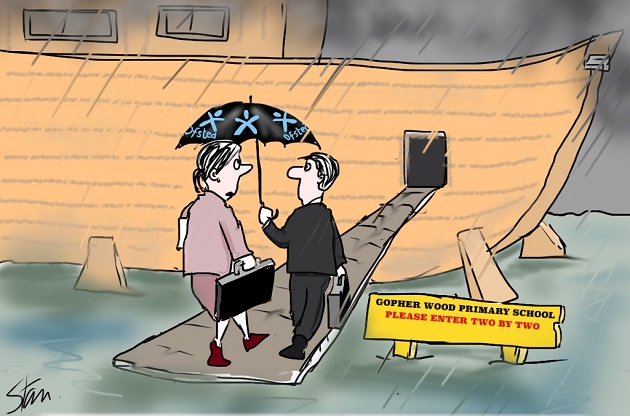 Teaching unions have criticised Ofsted for failing to act more quickly on the reliability of its judgements after it announced it would pilot “double inspections”.

Double visits by Ofsted inspectors are to take place on the same day at schools from the spring, following an admission by the inspectorate that not enough has been done in the past to ensure the reliability of judgements.

See below for reaction, which will be updated throughout the day. “We are concerned about issues of inconsistency and unreliability affecting Ofsted.

“In our response to Ofsted’s Better inspection for all consultation we said that it was ‘essential to remove any suggestion of inconsistency or unreliability’ and that ‘the individual context of a particular setting should always be taken into account’.

“We recommended that every Ofsted team should comprise at least two inspectors to ‘reduce the potential for bias caused by personality clashes or individual subjectivity’.

“A trial of ‘double inspections’ could help to iron out inconsistencies between inspection teams, although the addition of a system of external verification might address any concerns about Ofsted inspecting itself and strengthen the validity and transparency of the pilot.

“However, we are concerned about the burden such a system would place on schools and this must be taken into account.

“We would also like to see Ofsted inspections become supportive and developmental rather than clinical and punitive.” “The admission that Ofsted cannot guarantee the reliability and consistency of its inspection teams and judgements on schools is a disgrace.

“The NUT has long been saying that Ofsted judgements on schools were unreliable and that the system of school accountability in England requires root and branch reform.

“Ofsted should be abolished and a new system of school accountability based on school self-evaluation, school-to-school collaboration and support and a role for democratic local authorities put in its place. In the meantime there must be an external review of Ofsted’s operation and judgements.

“The suggestion that inspecting schools twice will resolve the flaws in the current system is nonsense. In effect this is merely punishing schools for Ofsted’s failings. There is clear evidence that Ofsted is a major source of unsustainable workload and stress for teachers and a major cause of teachers leaving the profession.

“Ofsted must go and the Government must act now to restore confidence in its school accountability framework.”

“Inaccurate inspection judgements can have disastrous implications for a school.

“Therefore it is a welcome step that Ofsted recognises there is an issue of reliability and is planning to address it. However, if it is going to proceed with double inspections, there needs to be proper quality assurance and absolute transparency about the detail of the process.

“Inspectors also need to have regards to the already heavy workload that the inspection process creates. Double inspections will inevitably mean more pressure for schools.” “Questions about the reliability of its judgements have dogged Ofsted since it was set up in 1992.

“It is incomprehensible that Ofsted has waited 23 years to investigate whether or not its judgements are reliable when the consequences for schools are so devastating if they are judged to be poor.

“We note that Ofsted, however, is not opening itself up to external evaluation of the reliability trials.

“If Ofsted has robust quality assurance, why is it not opening itself up to external scrutiny?”