Union leaders are demanding Ofsted makes a U-turn on its proposal to publish letters following ‘visits’ during the autumn term.

The schools watchdog announced earlier this year its inspectors would be making ‘visits’ to schools following their return to full education this term.

These interim ‘visits’ differ from Ofsted’s suspended routine inspections, which return next year, and are focused on helping parents and the public understand how schools are returning to their normal curriculum, the watchdog has said.

But further details this week of an “outcome letter” being published after the visit have caused a fresh backlash.

It states the visit letters will “feel like an inspection report” and “create an extra pressure on schools at a time when they are already juggling many demands”.

However Ofsted has hit back, saying that “suggesting that we should not publish any information at all for parents after a visit to their child’s school is not acceptable”.

The letter, which can be read in full below, states the unions had been in discussions with Ofsted on how best to roll out the autumn ‘visits’ and “felt we had arrived at an approach that would provide a valuable insight into educational recovery following the Covid lockdown”.

Under the unions’ understanding of the discussions, “the purpose of visiting a sample of schools during the autumn term was primarily to inform thematic reports that would be useful to the wider sector”.

The unions say they advised any letter published following visits should be “confined to advising parents and other stakeholders that a visit had taken place for this purpose”.

But they say Ofsted chose to follow a different route.

New guidance published by Ofsted earlier this week stated the letter will summarise the discussions inspector had with leaders.

Ofsted will aim to publish the “outcome letter” in the reports section of its website within 38 working days of the end of the visit, but may delay publication if a complaint is being investigated.

The watchdog said the aim is to provide parents with information about “what leaders are doing to help pupils back into full-time education.

“Letters will not provide any evaluation or graded judgement,” the guidance states.

But the union letter added: “We appreciate that you may view the planned letter as merely a summary of the discussion between inspectors and leaders. But you must understand that a letter written by an Ofsted inspector and published about a school will feel like an inspection report.

“This impression is reinforced by the fact that there is a mechanism for using a visit to trigger a full inspection; the sample of schools to be inspected includes all rated ‘inadequate’; the necessity for a complaints process about the planned letters; and the telling phrase in the sample letter we have seen: “We did not find any serious causes for concern during the visit”.”

The unions say they “cannot see how this approach is of benefit to schools, parents and pupils”.

“It is surely not too much to ask that schools are given at least one term’s grace from Ofsted processes, however framed, so that they can focus on the very demanding job of reintegrating pupils, and we ask you to reconsider your plans,” the letter adds.

Around 1,200 schools will be visited during the autumn term – including all ‘inadequate’ schools – and should “serious issues” be identified these ‘visits’ can become full inspections, as first revealed by Schools Week.

Ofsted paused all its routine inspections in March following the outbreak of Coronavirus but they are slated to return next year.

A spokesperson for the watchdog said unions have been “involved at every stage as we developed our plans for the autumn visits, including the letters. We have been clear throughout that the visits are not judgemental and that they require no preparation.

“We have also been clear that the letters for parents would be a simple summary of what school leaders told us – nothing more and nothing less. Our national summaries will contain much more information and insight.

“Suggesting that we should not publish any information at all for parents after a visit to their child’s school is not acceptable. We would urge schools to read our guidance – you do not need to prepare for visits and you do not need to be concerned about letters.” 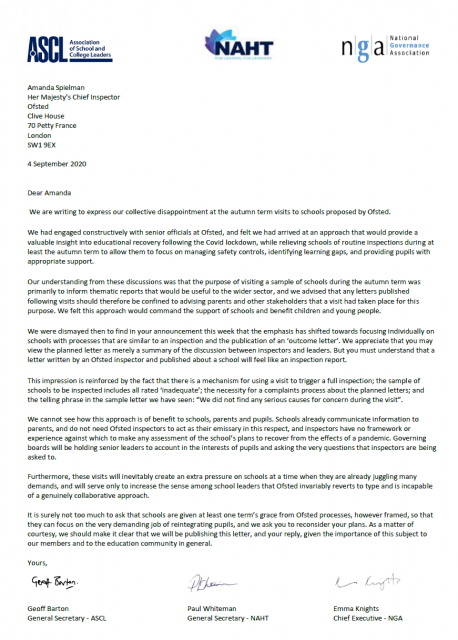