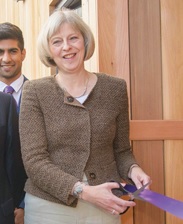 The Home Secretary has urged police commissioners to open alternative provision free schools to prevent troubled children from “falling into a life of crime”.

She said: “Future PCCs should bring together the two great reforms of the last Parliament – police reform and school reform – to work with and possibly set up alternative provision free schools to support troubled children and prevent them from falling into a life of crime.”

Ms May referenced Adam Simmonds, the police commissioner for Northamptonshire, who has been involved in the development of Wootton Park School, an all-through free school, due to open this September.

It is planned to have an “applied crime specialism”, according to its website, which will be “delivered by fully qualified and talented staff”.

In 2014, Mr Simmonds announced a feasibility study  into the use of former police HQ, Wootton Hall, for the school.

However, the site is still not secured with concerns flagged in a council meeting this week about its possible sale to the education department.

Ms May told The Guardian that the school was “an early intervention initiative” but admitted it would not just take “troubled children”.  The schools’ vision and ethos statements make no mention of being focused on alternative provision or early intervention.

The report also says the school is over-subscribed, having received 800 applications for a space in the first year group.

The school’s website says the site is still under negotiation.