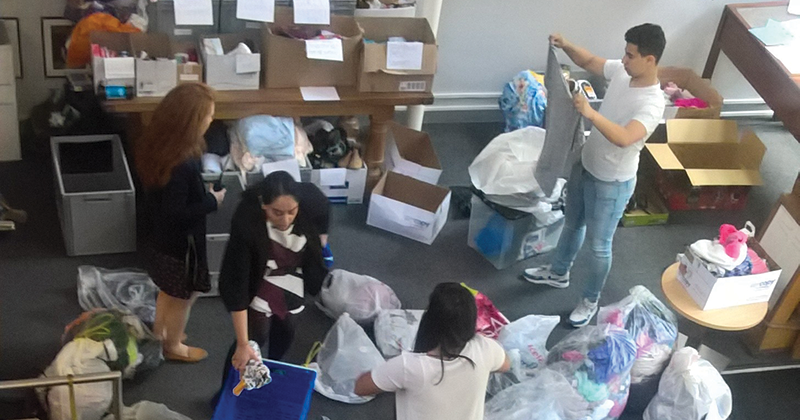 The “guts and bravery” of school leaders have been hailed in the aftermath of the Grenfell blaze, as neighbouring schools opened their classrooms up for pupils left homeless and without a school after the fire.

More than 70 people are presumed dead after a huge fire at the a 24-storey housing block in west London on Wednesday last week.

As firefighters continued to fight the blaze on Thursday morning, the schools community kicked into action for the hundreds of pupils left without a school, after the Kensington Aldridge Academy (KAA) – just yards from the fire – couldn’t open.

That morning, Ark Burlington Danes – just a mile away – made a makeshift exam hall in its atrium for year 12 KAA who had to sit an AS maths exam at 8.30am.

Even though so many were left homeless by the blaze, of the 60 students due to sit the exam, 55 turned up.

Michael Ribton, the principal at Burlington Danes, told Schools Week: “Some of these students don’t have any belongings left. The attendance has been fantastic – it’s incredible.”

The school is now accommodating KAA’s years 7, 8, and 9 classes – using an empty top floor in its recently opened primary for the year 7s.

Meanwhile, the year 12s, along with 20 KAA staff, will be based at Latymer Upper School, around a 15 minutes’ drive away, in Hammersmith.

Ribton added: “This is a trauma you’re never really prepared for in schools. While you promote a sense of safety, this is promoting beyond that a centre of calming that is really important for students. We want it to be as normal an experience as possible.”

Pupils will be based at the schools until the end of term, with KAA unlikely to open again until September.

Staff and students at the schools were also amongst the scores of helpers at the scene coordinating the distribution of clothes and food, and have since been fundraising to help those affected in their community.

The schools are also offering drop-in counselling sessions for both pupils and parents.

KAA’s principal David Benson told parents: “KAA has a strong ethos and culture which will carry us through this period and out the other side.
“In fact, I can already see how, however sad and distressing this tragedy is, our school will emerge stronger than ever before.”

He has been visited both by education secretary Justine Greening and national schools commissioner Sir David Carter, who tweeted that the “guts and bravery” he saw from staff at KAA will “remain with me for a very long time”.

“I saw fantastic courageous leadership in action,” Carter subsequently told Schools Week. “From planning assemblies, ensuring children could be educated at local schools, and reassuring the children affected who had taken exams the morning after the fire, I saw leaders responding to a challenge that very few of us have had to face ever.

“It was a reminder to me what a crucial role schools play when their communities are in crisis.”

Meanwhile, scores of schools across London were expected to donate money and wear ‘green for Grenfell’ today. Funds will be donated to the Kensington and Chelsea Foundation’s Grenfell Tower Appeal, which has so far raised over £1.6 million.

Other schools held a one-minute silence on Monday.