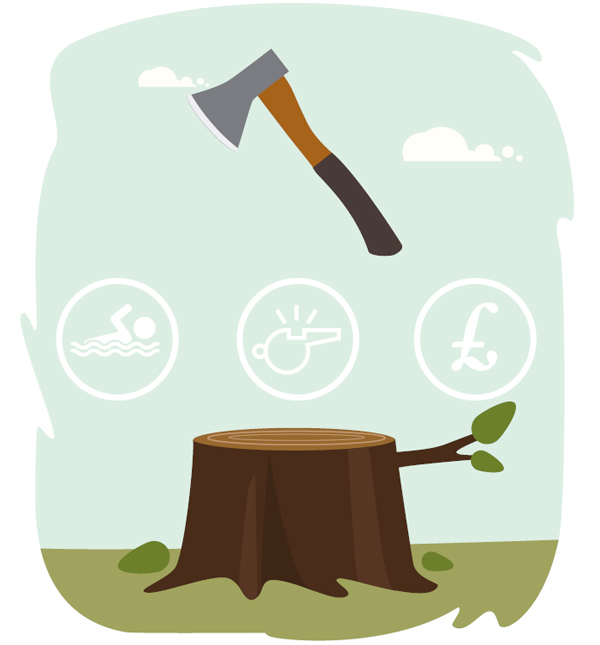 Swimming lessons, a school sports co-ordinator and emergency budgets for special educational needs (SEN) have been axed by councils in order to afford the spiralling cost of private finance initiative (PFI) contracts, at the same time as profits are soaring at the private firms the deals have been made with.

Councils receive government grants to repay the firms who built new schools under the Building Schools for the Future programme, but the amounts have stayed static while repayments rise every year.

Previously, councils found the cash to plug funding gaps, but now facing heavy cuts they are looking to recoup costs from other grants given to educate pupils.

Wirral Council had to make £2.3 million of savings last year to meet its PFI shortfall.

Council documents show cabinet councillors slashed £400,000 from their SEN top-up and contingency fund – money put aside to cater for unforeseen and exceptional SEN in schools.

Cutting a school sports co-ordinator role saved £25,000 and another £19,800 was recouped from slashed funding for the use of swimming baths.

The council is locked into a 30-year contract with Wirral Schools Services Limited for the provision of nine schools and two learning centres.

Annual accounts show the firm posted a £1.1 million profit after tax last year, up from £740,000 the year before. Its ultimate parent company is Semperian PPP Investment Partners Holdings Limited, registered in Jersey.

Steven Peach, headteacher at Oldershaw Academy and a former chair of Wirral secondary heads’ group, said cuts had been affecting the region’s schools.

“We are all under significant and increasing pressures with our budgets. Schools will soon have to consider redundancies. But we feel this is a national issue outside our control.”

Wirral council did not respond to requests for comment.

Frank Field, Labour MP for the Birkhenhead area in Wirral, told Schools Week: “The council should make it clear to the PFI contractors that it isn’t paying them another penny.”

He said the contract should be renegotiated to reflect the council’s “dramatic loss of funds”, adding: “The alternative is that some of Wirral’s most disadvantaged children will suffer a worse education.”

Roisin Maguire, head at St Joseph’s College in Stoke, said: “That money is given to the county to educate its children, yet it is being used to pay private companies. The council is creaming off the top [of its surplus] – it means less money is going into schools.”

Other examples of councils having to slash budgets in recent years to plug affordability gaps include Harrow, which had to cut more than £400,000, £200,000 in Lambeth and £125,000 for just one school in Herefordshire.

A series of investigations by Schools Week has previously shown how toxic PFI deals are pushing schools into financial ruin.

Jon Richards, Unison’s head of education, told Schools Week: “The government has left the problem for schools and councils to deal with – in places it’s verging on unsustainable.”

In 2000, when the deals were originally signed, Unison alerted the government to the problem in a briefing paper, stating there was a “disturbing pattern emerging of a significant funding gap between what the public authority can afford and the actual, annual charges of PFI schemes”.

Mr Richards added: “Who fundamentally is going to pick up these liabilities in the end? Where does the buck stop?”

Many councils are now calling in legal experts to help renegotiate deals. Slough council has dipped into its general fund to plug a £500,000 gap for its three PFI schools. The council is in talks with its PFI firm to make savings, including taking over the procurement of utilities.

David Johnson, director of Castle Gate Legal & Commercial Ltd, which is used by local authorities to help them renegotiate PFI contracts, said there were some options that could be delivered quickly.

He added: “PFIs are notoriously inflexible and it’s not straightforward to renegotiate contracts – a lot depends on the relationship between the local authority and the contractors.”