Special schools could be at risk of closing completely if government guidance on vulnerable children is not updated urgently, sector leaders are warning.

The Department for Education has confirmed to Schools Week that special and alternative provision schools will be closed to all but vulnerable and key worker children.

However, any child with an education health and care plan (EHCP) is deemed as vulnerable and able to attend school during lockdown – which accounts for nearly 98 per cent of special school populations, according to the latest statistics.

The government has yet to publish updated schools guidance on the latest lockdown, but its current list of those who can go to school states only children of critical workers or vulnerable children “should” attend school.

SEND Action, a campaign network of families, individuals and organisations, has put a call out for parents of children with an EHCP, who are not able to attend school, to share their stories.

One parent said that a special school is only allowing the “most” vulnerable back into school. “No discussion with parents at all,” the parent added.

SEND Action responded to one tweet with: “Children with EHCPs should be able to attend but lack of support/guidance for special schools seems to be preventing this in some cases.”

Knight added the sector urgently needs “more clarity” on how to determine who within schools “has the greatest need” or face staff invoking their legal rights on working in an unsafe environment.

Adam Boddison, chief executive of SEN organisation Nasen, said his plea was to “let professionals locally” who know the children and families make professional determination of who to support and add “most vulnerable” to the guidance.

He added: “The problem that government has got is how do they balance the two competing priorities of the legal right to education that is enshrined within the Children and Families Act for EHCPs with the teachers rights to have a safe working environment and those two things butt right up against each other because of the wider situation.

“Ironically, the solution to this is where possible, to give remote education as actually for some children that will work as well if not better and that’s the flexibility that isn’t there at the moment.”

There has been confusion today about the situation at special schools and alternative provision.

The Prime Minister failed to mention the two types of schools in his announcement yesterday, only referring to primary and secondary schools, colleges and early years settings and that those who are clinically extremely vulnerable should shield again. 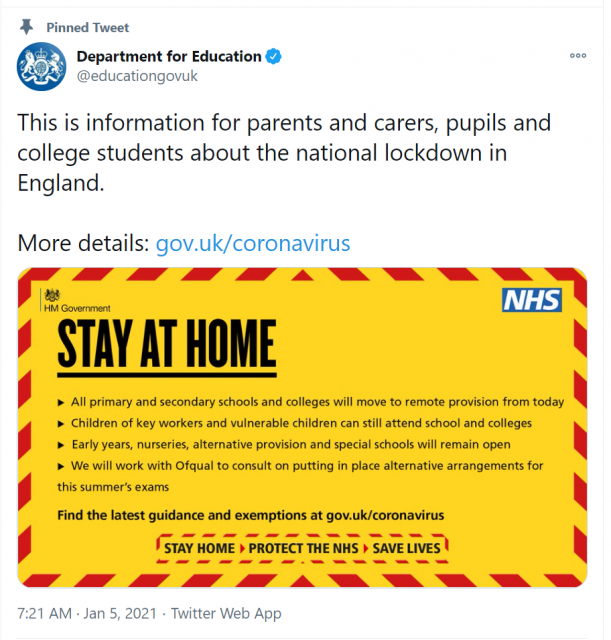 An email sent to heads last night after the broadcast said that AP and special schools would be open to vulnerable and the children of key workers.

But a tweet sent out by the DfE this morning said that “early years, nurseries, alternative provision and special schools will remain open”.

The DfE has finally confirmed to Schools Week this afternoon that AP and special schools will in fact be only open to vulnerable pupils.

Knight, also national SEND Leader at Whole School SEND, added: “Once again Government has acted without due regard to the specialist sector, those who work within it, but most importantly the children who attend and their families.

“This failure of leadership, and an apparent unwillingness by Government to consider the unique characteristics of the sector and those it educates, has left schools scrabbling to work out how best to serve their communities safely.”

Special schools were told last week they had flexibility to get mass testing organised – meaning they did not have to fully open until the second week of term.

The guidance, published last week, said that schools had the option of agreeing with parents that individual pupils can stay at home, but the aim should be that all pupils in special schools and AP are back on or after January 11.

Leaders are now in the dark over whether this flexibility still applies this week, or they have to welcome back all vulnerable pupils