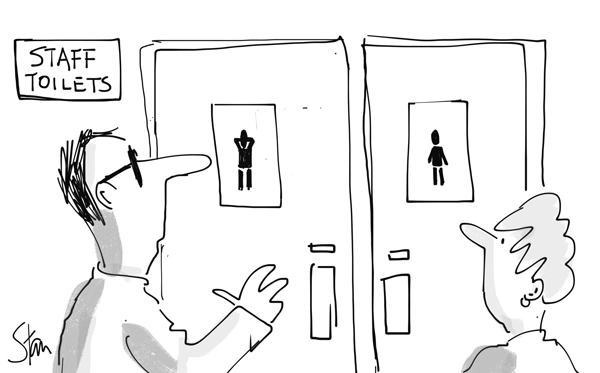 A school in east Yorkshire will join at least 63 others in being “trousers-only” for girls after male teachers allegedly said they were uncomfortable with female pupils’ short skirts.

Bridlington School will remove skirts from its uniform in September 2015, despite a 1,100-strong online petition against the change.

Headteacher Sarah Pashley sent a letter to parents last week stating that she wants all pupils to wear trousers, each with the school’s logo stitched on to the clothing.

To address concerns about additional costs, the school has sourced an embroiderer who will put the emblem on to trousers bought from non-school uniform suppliers.

But a popular online petition arguing against the move says: “We believe that this uniform change is penalising the whole school for the misbehaviour of the few children that refuse to follow the current uniform rules.”

Bridlington School is not unique. Website schoolskirtban.co.uk tracks schools introducing trouser-only policies and claims that 63 schools in England have the rule in place.

The site shows a cluster of 18 schools in Yorkshire that have imposed the ban.

It also claims a further 11 schools have reverted back to allowing skirts since making the change, including The Brunts Academy in Nottinghamshire and Greenwood Academy in Birmingham.

Ms Pashley said in a statement to Schools Week that 25 parents had contacted the school since sending out letters about the uniform change.

She said the school sourced the embroidery company in response to their concerns and reaffirmed that “no parents will incur additional costs meeting the new requirements of the new trouser policy”.

Fern Barber, a researcher at school support company The Key, said that schools were free to set their own uniform policies.

“Government guidance recommends that [governors] should consider cost, practicality and the views of parents and pupils when making significant changes, and if there are complaints, they’re expected to work with parents to find a solution.”

She also said legal concerns about discrimination might not stand up to scrutiny. “The guidance also says that a requirement in a uniform policy that puts one group at a disadvantage might count as indirect discrimination if it’s applied across the school. This could still be lawful if a school has a reasonable objective, and the requirement’s a proportionate way of achieving that.”