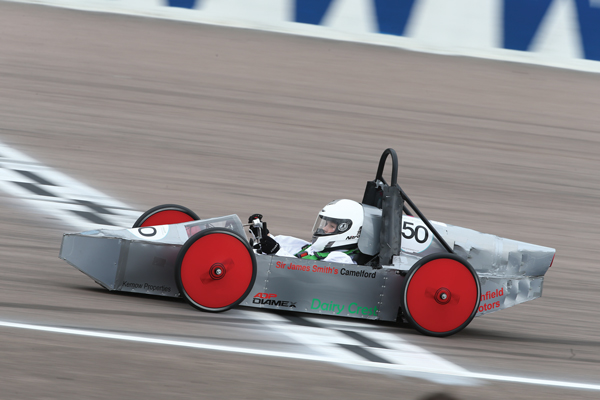 A team of kit-car racers from Sir James Smith’s School, Cornwall, rocketed to victory in this year’s Greenpower International final.

The squad, guided by the school’s subject leader for art, Ben Langton, battled through local and regional heats to reach the finals at Rockingham Motor Speedway track in Corby, Here they competed against home-grown kit-car rivals, plus teams from the US to Poland and South Africa to Ireland.

The team, who have worked on their car, the Retro Rocket, since January, returned to Cornwall with an array of trophies, medals and winners’ wreaths. Not only was theirs the first kit-car home, they also won the endurance race, totting up the most mileage. Their aim was to travel as far as possible in one-and-a-half hours, swapping drivers every half hour, and conserving enough battery energy to gain the most mileage at the best speed.

The jubilant team was made up current and past students. The current students are Toby Alford, William Hooper, Tom Davis, Dan Blackwell, Isla Symons, Harvey Symons, Alex Ferguson and Alex Quinn. Past students, who left in July after completing their GCSEs, include Peter Alford and George Hooper.

Mr Langton, who brought Greenpower to the school for the first time this year, praised the positive attitude of his team.

He also highlighted the benefits of the project as it encompassed mathematics, science, engineering and technology.

Headteacher Jon Lawrence, said: “This shows just how talented our students are. Sir Jim’s is a small state comprehensive up against the might of very large schools, many of them private and some of them with superb engineering departments. This was David beating Goliath.”

The team are now designing and building a new car, Vintage Volante, to compete in next season’s Greenpower challenge.