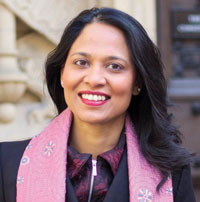 The Junior Shadow Minister for Education Rushanara Ali has stepped down after refusing to take part in yesterday’s vote on military action in Iraq.

The Labour MP who had responsibility for young people on the opposition’s front bench said she was concerned civilians would be caught in the crossfire.

Parliament was recalled yesterday to vote on whether or not to launch air strikes on Islamic State (Isil) fighters in Iraq.

Ms Ali wrote to Labour Leader Ed Miliband ahead of the vote, saying: “There can be no doubt that the actions of ISIL are horrific and barbaric, and I share the revulsion that everyone in our country feels towards them.

“However, I am not confident that this military action will be effective in the short-term in just targeting the terrorists and not harming innocent civilians.”

She added that she also did not believe that there was “a credible long-term strategy”.

She said serving as a shadow education minister had been “a privilege” and she had come to the decision with “regret” but that she could not, in conscience, support the motion to go to war.

No replacement for her has yet been announced.

Ms Ali represents Bethnal Green and Bow, a constituency with a large Muslim population and is herself a Muslim.

“I know that British Muslims stand united in the total condemnation of the murders that ISIL have committed,” she said.

“However, there is a genuine belief in Muslim and non-Muslim communities that military action will only create further bloodshed and further pain for the people of Iraq.”

She added that, “despite good intentions, too many mistakes have been made” in Iraq through “misconceived actions” by the UK and other countries.

In his reply to her resignation letter, Mr Miliband said: “I know that you have thought long and hard about this.

“I respect your decision.”

He added that she had “served with real distinction” as a shadow minister and described her as “someone with great ability and talent”.

Ms Ali will continue to represent her constituency.

A Labour Party spokesperson said Ms Ali’s replacment would be announced “in due course”.