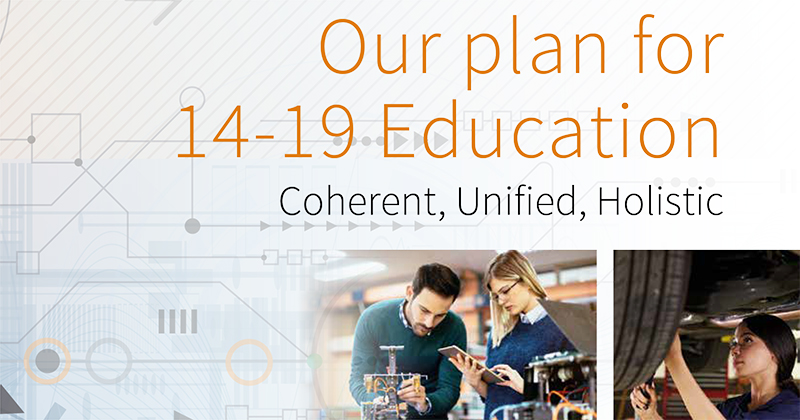 “Cliff-edge” GCSE exams at 16 should be scrapped in favour of a 14 to 19 “phase” where pupils complete their qualifications “at the right pace for them”, the Edge Foundation has said.

The independent charity, which aims to raise the status of practical and vocational learning, has warned the UK’s education system is failing to prepare youngsters for 21st century jobs in its ‘plan for 14-19 education’ published today.

However the report doesn’t mention widely-reported problems in the university technical college (UTC) programme for 14 to 19-year-olds, nor how to address issues they’ve encountered, such as under-recruitment.

Instead the report makes eight “radical” recommendations for the government to introduce across all schools.

They include adding a creative subject such as art or drama into the EBacc, introducing mandatory work experience in schools, and offering apprenticeships to 14-year-olds. Edge – chaired by former education secretary and UTC advocate Lord Baker – claims that current GCSEs are designed around “age not stage”, where all pupils are expected to be ready for the same exam at the same age.

Olly Newton, director of policy and research at Edge, who wrote the report, said this format has led to a “downward spiral of English and maths resits for young people which leave them demoralised and rarely making headway”.

To smooth this “cliff-edge”, the foundation wants to bin exams at 16 and introduce a 14 to 19 phase where pupils can complete their GCSEs at any point over this age period.

“GCSEs should become a progress check rather than a make or break point,” Newton said.

“Some schools already offer young people the opportunity to sit GCSEs early in year 10 and there is no reason why young people should not be able to sit GCSEs in particular subjects for the first time later too.”

He adds that a move to this system would “reduce and eventually remove the stigma” for young people who take longer to pass GCSEs in English and maths.

But Geoff Barton, general secretary of the Association of School and College Leaders, told Schools Week that delaying GCSEs by a year or two would “just move the ‘cliff edge’ to a different point”, and pupils would have “less opportunity to study alternative qualifications if they were unsuccessful”.

He said it needs to be ensured that all students have an “equal opportunity” to study for and sit GCSEs in English, maths and other “important” academic subjects, and it would be “difficult to preserve that equality of opportunity” in a phased examination system.

The report follows calls last week from the Baker Dearing Trust, which promotes UTCs, for three “wishes” to boost 14 to 19 education.

That included schools having to “assess” which pupils best fit UTCs before sending unsuitable learners on to them.

A DfE spokesperson said: “The reforms to GCSEs are driven precisely by the need? for high standards for young people in our schools, so that they get the knowledge and skills they need to succeed in life.

“The new GCSEs will provide more rigorous content and the new grading system provides greater stretch for the highest performers, by showing greater distinction between the top marks.? These changes will help young people ?to compete with the best in the world and deliver the skills that employers tell us they need.”