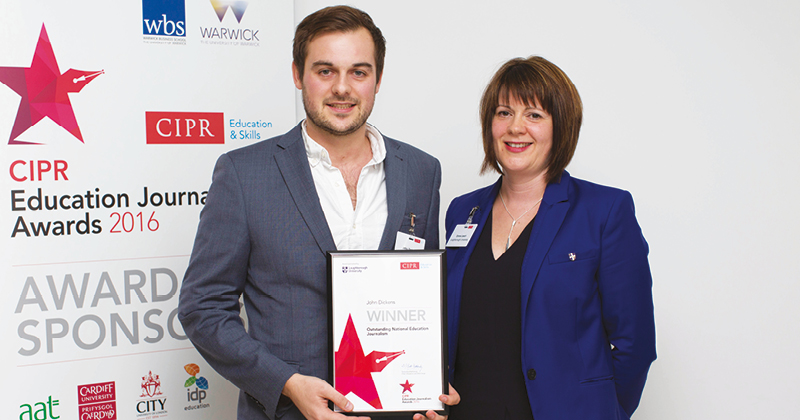 Accepting the gong at the CIPR Education awards, held at The Shard in central London, Dickens was nominated for his investigations into independent school standards, parents unable to pay private school bills, and his “philanthro-philes” series that uncovered the wealthy donors bankrolling the academies project.

The award was presented by Emma Leech (pictured with Dickens), director of marketing and advancement at Loughborough University, who said the judges agreed the work was “excellent and tenacious”.

In particular, Dickens was congratulated for weaving “human interest stories” with “the nuts and bolts”.

“The pieces were strong in their own right,” Leech said, “and, together, created a completely thought-provoking piece of work.”

At the announcement of Dickens’ win – who was up against four nominations from TES – Leech cheerfully asked his colleagues to “pipe down” and pointed out that sister newspaper, FE Week, had already “done the double” earlier.

Dickens said: “Winning the award caps off two years at Schools Week where we have led the way in asking difficult questions and cutting through the bluster to report need-to-know information during a turbulent time.”

He was also pleased to see the judges acknowledge the importance of investigative journalism, “something we are passionate about at Schools Week”.