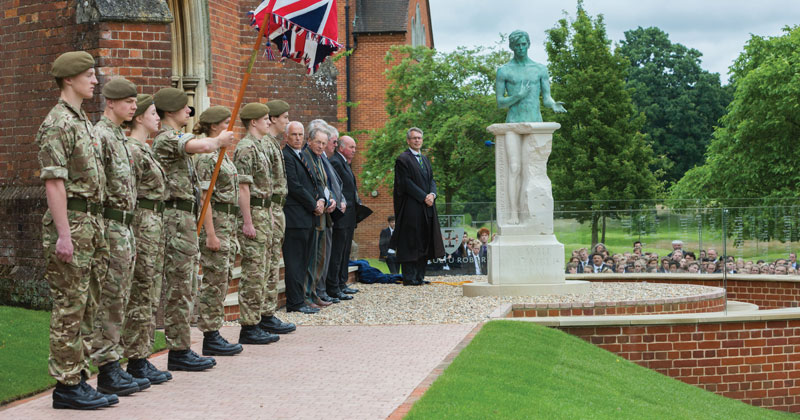 Cranleigh school in Surrey has unveiled a contemporary war memorial to commemorate the 100th anniversary of the Battle of the Somme.

Students and staff gathered at the front of the school on June 1 to watch Richard Dannatt, former head of the army, unveil a statue sculpted by Nicholas Dimbleby, the creator of the well-known “Whistler on the Southbank”. The new statue, called “Leaving”, depicts an 18-year-old youth and is encased in a stone plinth that has been shelled and mortared.

The bronze and Bath stone statue is
3½m high and has the words “We Must Love One Another or Die” on its plinth. Names of past pupils who died at the battle are inscribed around its curved glass terrace.

Student Charlotte Johnson says the piece “profoundly captures the pride and the courage that all the young men from Cranleigh would have walked out of the school gates with as they headed towards the front lines to fight for their country”.

Pictured: Cranleigh pupils and staff gather for the unveiling of its new war memorial