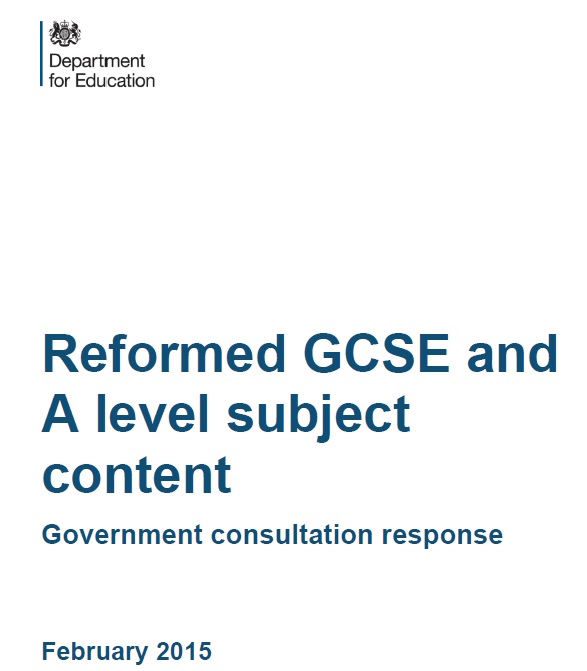 Revisions have today (Thursday, February 12) been published to the subject content for the final set of reformed GCSE and A levels following a government consultation.

Alterations have been made to a number of subjects, to be taught from September 2016, following comments from a variety of people including teachers, parents and local authorities.

However, the government rejected calls for the optional systematic study of non-religious beliefs to be included in the GCSE and A level religious studies subject content alongside religious beliefs despite a campaign led by the British Humanists Association.

A total of 1,775 out of the 2,093 respondents – where 1,691 were part of the campaign – supported the idea but the government felt “this would not be a suitable addition to the content, given the nature and purpose of a qualification in religious studies”.

Schools minister Nick Gibb said the new religious studies qualification would provide students with a “broader and deeper knowledge” of religion. GCSE pupils will spend at least half their time developing knowledge and understanding of two religions while A level candidates will study at least one religion in depth.

Following comments from respondents who felt more active citizenship was required in the qualification, students will have to carry out at least one critical investigation leading to a campaign or similar activity with assessment by written exam.

In the drama GCSE, students will study at least one play in depth and two extracts from a second play while at A level at least two plays will be studied in depth, three extracts from other plays and two theatre practitioners.

Both qualifications have enhanced performance skills with GCSE students having the opportunity to participate in two performances and A level pupils using the working methodologies of the practitioners studied in their own work. Non-exam assessment counts for 60 per cent of the final mark.

The food preparation and nutrition GCSE, which is split evenly in terms of exam and non-exam assessment,  places greater focus on subject knowledge and will enable candidates to apply this when preparing and cooking meals. The name of the qualification was changed from cooking and nutrition following comments during the consultation.

The government has already published subject content for a number of GCSEs and A levels to be reformed.

Mr Gibb added: “In common with all reformed GCSEs and A levels, the qualifications will be academically rigorous to prepare students for life in modern Britain and keep pace with the expectations of universities and employers.”

However, Association of Teachers and Lecturers general secretary, Dr Mary Bousted, said: “We are concerned the new GCSEs and A-levels being introduced from 2016 will not fully assess practical skills.

“We agree that these new qualifications should be academically rigorous, but assessment should test whether pupils can apply the skills they have learned, not just how well they can regurgitate facts.”