The government is facing renewed calls to review its controversial EBacc accountability measure after three separate claims by ministers about the success of the reforms were debunked.

The Russell Group of elite universities yesterday ditched its list of “facilitating subjects” amid concerns that too many pupils felt they had to study only academic subjects to get into university.

The list of preferred subjects included all five of the areas covered by the EBacc – maths, English, the sciences, languages and history or geography – which was modelled in part on the facilitating subjects list.

It has devalued other subjects

Just last month schools minister Nick Gibb fought off criticism of the EBacc from MPs, arguing that they are “regarded as the subjects that keep the widest possible options open for young people”.

He has also previously boasted of increases in the number of pupils studying facilitating subjects as a result of the EBacc policy.

Geoff Barton, the general secretary of school leaders’ union ASCL, said it was “abundantly clear” the EBacc is “beset with problems”.

“It has devalued other subjects and, together with severe funding pressures, this has had a particularly detrimental impact on creative arts courses which are increasingly unsustainable. We call on the government to review its EBacc policy.”

To rebut concerns that the EBacc is pushing creative subjects out of the curriculum, the DfE has relied on claims that “since 2011, the proportion of pupils in state-funded schools taking at least one arts subject has increased”.

But it has emerged this week that the proportion of pupils taking an arts subject actually fell to 44.3 per cent last year, below the 44.7 per cent level seen in 2011.

Gibb also told MPs during the parliamentary education committee in April that he didn’t accept that there has been a narrowing of the curriculum because of the Ebacc, adding that there was “plenty of space beyond EBacc to study those vocational subjects”.

But Schools Week reported last week a DfE-commissioned study found schools that achieved high EBacc entry rates had used “more creative ways” to teach non-EBacc subjects, such as in after-school sessions, during tutor time, or cramming them into “intensive” days.

Deborah Annetts, founder of the Bacc for the Future campaign, said: “We urge the government to look again at their EBacc policy, which is already failing on its own terms and has no place in a 21st-century education.”

But the government has refused to back down, confirming it also has no current plans to scrap an accountability measure that records the proportion of pupils in schools taking facilitating subjects. 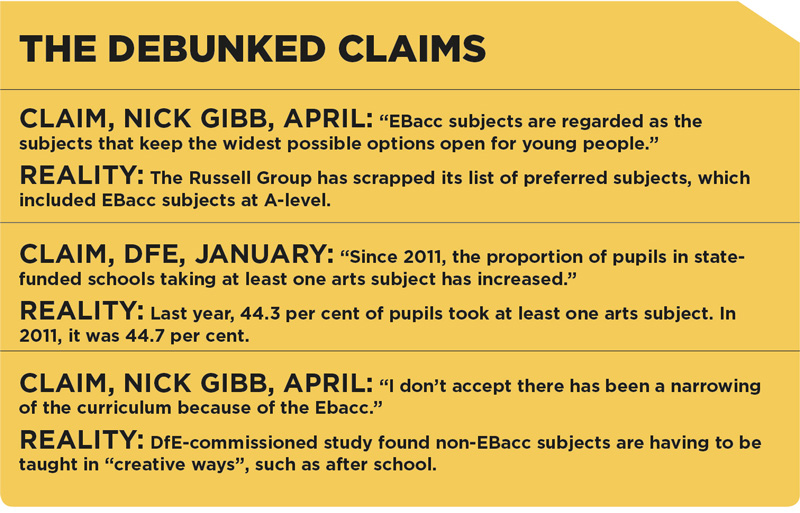 In a statement published on its website, the Russell Group said facilitating subjects had wrongly become viewed by some as “the only subjects pupils should consider to get into a Russell Group university, or that you must take them for any degree”.

The facilitating subjects list has been replaced with a new website called Informed Choices, which suggests A-level options for pupils based on what they want to study at university, and more general guidance for those who haven’t yet made up their mind.

A DfE spokesperson said they “welcomed the move”, adding: “Their Informed Choices website shows the importance of EBacc subjects for keeping a young person’s options open when it comes to possible future degree choices.”

Ofsted’s new inspection framework also states that in order to be rated ‘good’ or better, schools must aim to have the EBacc “at the heart” of their curriculum.

Previous studies have suggested the EBacc has boosted social mobility. A Sutton Trust study carried out between 2009 and 2013 found that pupils in schools that increased the proportion of EBacc entries were more likely to achieve good GCSEs in English and maths.