Tony Blair has honoured one of the “pioneers” of the academies system, Ros McMullen, after she was presented with a special recognition award at the National Trust Leaders Conference in Nottingham today.

The former Labour prime minister, whose government introduced the academies programme, recorded a video tribute to McMullen, praising her services to the sector.

McMullen, who retired from her position of executive principal at the Midland Academies Trust over the summer, said she was “completely taken by surprise” at Blair’s message, telling Schools Week: “I had absolutely no idea. It was absolutely marvellous and they couldn’t have given me a nicer surprise than that.”

Blair said via video link: “When we launched the academies programmes, we did so with the backing and commitment of many great headteachers, including Ros herself.

“The reforms were dependant on giving our very best headteachers and school leaders more freedom and more responsibility to shape schools, including the curriculum, staffing structures and the commitment to building aspiration in communities that had been failed for too long.

“In government we had the ideas and policies, but we still needed headteachers to embrace them and to use these greater responsibilities.

“Ros was one of those headteachers who embraced these new freedoms and she became one of the pioneers, becoming a principal of the David Young Academy in Yorkshire, the first academy in the country.” 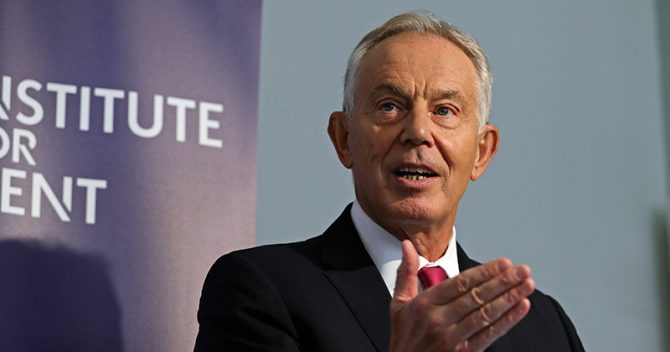 Blair said that McMullen “exemplifies the creative, aspirational and community-focused leadership that the academy trust system depends upon” and praised her for inspiring other headteachers.

McMullen began her headship journey in 2000 and went on to serve as an executive principal and multi-academy trust chief executive. She is also one of the founding members of the Headteachers’ Roundtable.

Blair thanked McMullen “for all her years of service”. He said: “Leadership matters and in the world of education it matters enormously and a whole generation of children and young people depend on the quality of that leadership.

“Ros McMullen has shown what that leadership can be and how much change it can bring about in the lives of young people.”

McMullen is a self-confessed champion of the original academies programme, saying it was “superb”.

She said: “I was really, really supportive of the Blair academy programme, which seemed to me to be a preferential option for the poor.

In government we had the ideas and policies, but we still needed headteachers to embrace them and to use these greater responsibilities

“It was about putting the most money into the most deprived communities and building the most fabulous schools and I was so supportive of that.”

But she is far more scathing of the current political climate and education policies since the coalition government came to power in 2010.

“There has been so much short-termism, so much chasing targets, the accountability pressure and, actually, it’s really important to focus on long-term sustainability and improvement.”

She said that there is currently a real need for long-term planning and improvements in the education system, adding: “I’m not seeing coherent or joined-up education policies from any of the political parties at all.”

McMullen said: “Unless we start thinking about long-term improvements in schools then, for schools that are serving difficult communities, they are just constantly on a hamster wheel and under pressure to deal with the accountability system.”