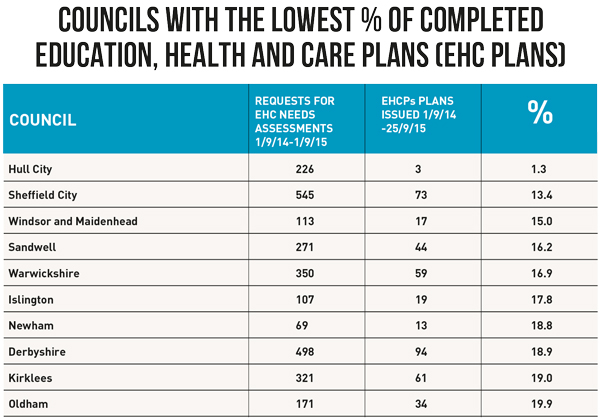 Schools are facing a “postcode lottery” in funding due to variations in the implementation of new special needs reforms, a legal expert has warned.

A law introduced education, health and care plans (EHCPs) for people up to 25 who had previously had a statement of special educational needs. All pupils with high needs will have an EHCP by next September, the government has said.

But responses to a Freedom of Information (FOI) request highlight large differences between councils in the proportion of requests for needs assessments and the amount completed between September 2014 and the end of September 2015.

The patchy picture is a potential problem for already-squeezed school budgets.

Barney Angliss, special educational needs and disability co-ordinator at Rydens Enterprise School in Surrey, told Schools Week the plans affect “top-up” funding for schools as it is only given once they are issued.

“It also makes it hard to keep the other agencies – for example social workers – involved. If there is no EHCP on the horizon things become a bit disorganised.

“Parents also become very concerned. When you’re trying to keep the messages to the child positive it’s not helpful if the LA can’t tell you when the plan is going to arrive on the desk.” Education solicitor Laxmi Patel of Boyes Turner said the variation in the proportion of EHCPs issued across councils “is another example of postcode lottery that should not be happening”.

Based on the responses, 45 per cent of requests were converted into plans.

Ms Patel also said all requests for an EHCPs should be “completed within the 20 week timetable so that the child’s needs can be assessed and appropriate provision put in place immediately”.

A government statistical release published last May said early indications “show 64.3 per cent of new EHCPs issued from September to December 2014 were within the 20 week time limit”.

Ms Patel said reasons for the variation could be that requests for assessments came later in the year – meaning the plans were not issued in time to be included in the FOI statistics.

But also added: “The figures could also indicate something is going very wrong. It could mean LAs are carrying out assessments but not issuing plans.”

One trend she has seen over the past year is LAs turning down requests for plans and instead ask schools to apply for support, rather than have parents apply for a plan.

“LAs will say this avoids the need for parents to go through the process of assessment leading to an EHCP. However, an EHCP is a legally binding document that enshrines a child’s right to the support included in the plan. Local provision does not carry the same right.”

A spokesperson for Sheffield City Council denied there was a postcode lottery and it was misleading to say there was.

He added: “We operate a robust system here in Sheffield in terms of how we assess children and young people with potential SEN and whether these need to result in formal EHCP or not.”

Hull City Council said it experienced a number of difficulties throughout 2014-2015. It said its strategy for dealing with the transfer to EHCPs was “over ambitious”. A key staff member also resigned during the period.

In the case of Derbyshire County Council, 19 per cent of requests for assessment resulted in an EHCP. A spokesperson said: “We’ve been working hard to eliminate these delays and almost all of the outstanding EHCPs have now been issued to parents.”

According to the FOI response from Islington Council in London, there were 107 requests for assessments and just 19 EHCPs were issued. But a spokesperson said the figures did not reflect the reality in Islington.

He added: “The true figure is that Islington has issued plans for 92.7 per cent of assessments completed since September 1, 2014.”

Schools Week understands that significant variations between councils on performance in issuing EHCPs are not expected – and will be investigated if they emerge. Asked to comment on the variation in performance revealed in the FOI responses, a Department for Education spokesperson said the reforms were the biggest in a generation and councils were working hard to implement it.

“These reforms mean that for the first time ever, the needs of children with special needs across education, health and care are addressed together in one coherent plan.

“We have also set clear expectations for councils dealing with new assessment requests, including closer working with parents and a much stronger emphasis on children’s outcomes.

“Councils are legally required to fully consider the views of the child and family when deciding what support to offer, and where there are disagreements, parents can appeal to the SEND Tribunal.”

Melinda Nettleton, a solicitor for SEN and disability legal practice SEN Legal, said there was “no legal reason for such a wide disparity” and in the 18 months since the new rules started there have been “somewhere in the region of 400 refusal to assess appeals”.

The success rate for refusal appeals so far is 100 per cent. “On your figures it is hardly surprising,” Ms Nettleton said.