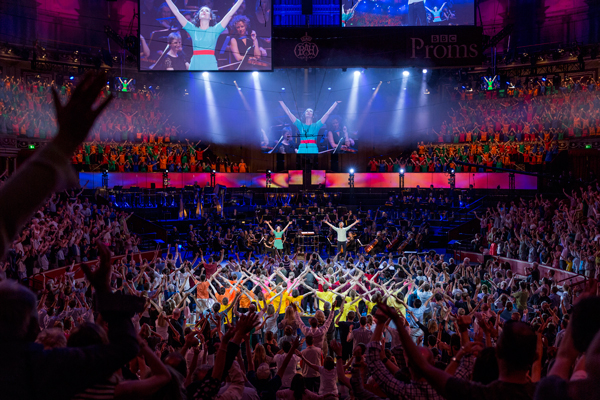 Performing in front of thousands of music lovers in the grand setting of the Royal Albert Hall would be daunting for most people, but not for these primary school pupils who belted out their classical music renditions in style.

The performances by the four schools were for the BBC Learning Ten Pieces Prom, which took place over the weekend.

The prom celebrated the first year of the Ten Pieces initiative, which aims to inspire young people to experience and enjoy classical music.

Last year, 10 varied orchestral pieces were recorded and packaged up in education materials made freely available to schools, and also performed around the UK by BBC orchestras. Pupils from Chase Bridge Primary School perform for the crowd

On Saturday and Sunday, a group of pupils from Chase Bridge Primary, London, hit the high notes in their composition “Volcano”, inspired by composer Edvard Grieg’s “In the Hall of the Mountain King”.

And the Withycombe Stomp group from Devon’s Withycombe Raleigh Church of England Primary School performed a movement-based response called “6 out of 10”. The performance depicted “In the Hall of the Mountain King”, “Zadok the Priest”, “The Firebird”, Beethoven’s “Symphony No. 5”, “Connect It” and “Mars” from Holst’s “The Planets”. Presenters Molly Rainford and Barney Harwood talk to the audience

Sinead Rocks, head of BBC Learning said: “This first ever BBC Ten Pieces Prom was a really special moment for everyone involved in this incredible campaign, as we saw the creativity that’s been unleashed in schools across the country take centre stage at the Royal Albert Hall.”

In between the live performances, a selection of classroom dances from more than 1,400 schools were projected around the theatre from the past year while CBBC’s comedy duo Dick and Dom conducted the BBC National Orchestra of Wales, with help from professional conductor Thomas Søndergård.

Music specialist Emily MacQuarrie from Drummond School in Inverness, who had their performance displayed on the big screens around Albert Hall, said the pupils and parents “couldn’t believe it” when they heard the kids’ soundscape.

“We really enjoyed listening to the prom, hearing the Ten Pieces being played live and the four schools who performed on stage who were absolutely incredible,” she added. Following the spectacle, a Ten Pieces Film will be premiered in September and then released in cinemas across the country. Schools can sign up and take groups of pupils to view the film.

The BBC has also announced the project will be extended to secondary schools, with a new selection of music for students and teachers to explore from next term.

Ten Pieces ambassador Julian Lloyd Webber said: “Ten Pieces has been a wonderful introduction to music for lots of children, and many adults too. Now for the next Ten Pieces. Everyone loves music so let’s celebrate it together.”