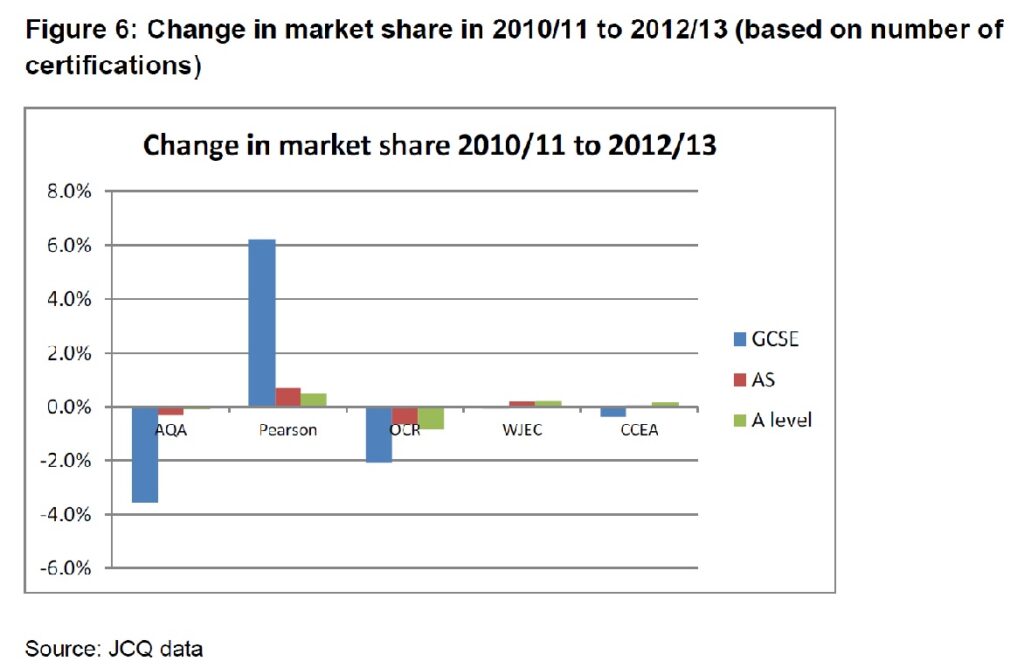 Pearson is increasing its hold on the market in choice by schools for qualifications, a report by Ofqual released today shows.

In the report by the exam regulator, which was commissioned to understand purchasing behaviours in schools, shows exam board Pearson increased its market share in GCSE qualifications by six per cent between 2010/11 to 2012/13.

It also has the highest increase in market share in both AS and A Levels.

The Ofqual report said Pearson had gained its market share from AQA and OCR.

Three-quarters of academic staff interviewed had switched awarding organisation in the last three years in at least one subject, according to the report.

The reasons schools chose to change providers are listed in the report. Topping the list was both the course content/syllabus and due to the advice of colleagues/peers/local authority, followed by switching to meet the needs of students.

Other reasons were the form of assessment, poor results/pass rates and change in specification.

The report said: “The research found that price plays a limited role in purchasing.

“While the survey suggests that fees were not regarded as important in purchasing decisions, eight per cent of academic staff suggested that concerns over awarding organisation fees could theoretically prompt switching between awarding organisations results align with the Centre for Education Research and Practice’s (2011) conclusions that the qualification purchasing market is price-insensitive and decision makers are primarily subject heads of department who are uninformed about fees.

“Our own analysis confirms the survey finding that switching is highest for schools and colleges when new qualifications are introduced and the barriers to switching are at their lowest.”

An AQA spokesperson said: “The report clearly shows that schools and colleges move freely between exam boards. This is quite natural, and healthy, in a system that enables teachers to choose the qualifications that are right for their students at that point in time.”

In November, Schools Week carried out an analysis of the drop in expenditure of schools’ late entry costs. It showed £12 million had been saved in the last academic year by entering pupils on time.

Rod Bristow, President, UK & Core Markets for Pearson, said: “As we redevelop our GCSE A level and BTEC qualifications, our focus is on quality, so I am pleased to see that this research shows that this is what schools have said they value the most.

“Quality and support for great teaching sits at the heart of our competitive proposition. We define quality by putting the student at the centre; by ensuring that our qualifications are second to none in defining the knowledge and skills needed for progression to further or higher education and into a career. Our independent International Panel of Experts has endorsed our approach as delivering world class qualifications”.