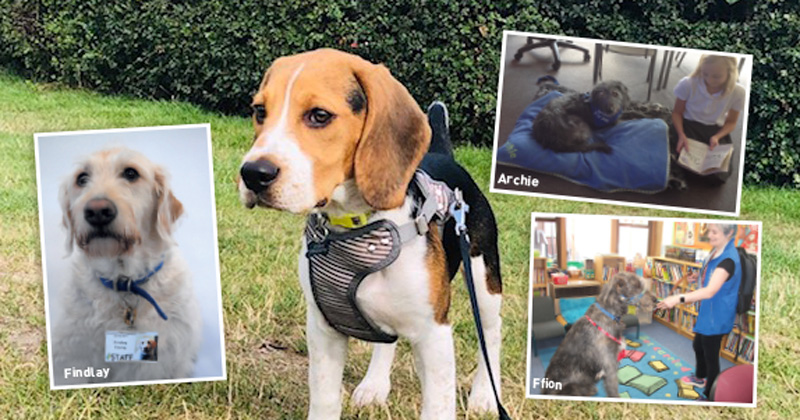 An academy trust has spent £12,000 buying a dog for each of its four schools, claiming that it is a more cost-effective way of reducing stress in the classroom than employing welfare officers.

Schools Week has found 12 Ofsted reports since 2016 that have praised schools for using therapy dogs. Two were under the new framework introduced in September.

Betsy waits by the school gates every morning and greets the children. Such a simple act has removed the fear some had of coming to school

Whilst there’s a scarcity of research from England, studies in America suggests the addition of a canine friend can reduce stress and provide a sense of connection in difficult situations. One US study found they lowered cortisol levels and triggered oxytocin – a neuropeptide that increases trust in humans.

Woodland Academy Trust bought dogs for each of its four primary schools in London and Kent.

Julie Carson, its director of education, said it wanted to lower the “high number of children coming into schools with anxiety and mental health difficulties” and it was encouraged by the US research.

The trust began by introducing Betsy the beagle to Knockhall primary school in Kent this May. Her impact was so immediate it purchased three more dogs.

Carson claimed attendance for children working regularly with Betsy had improved by up to 16 per cent – compared with about 3 per cent for other pupils – as well as improving punctuality across the board. The largest improvement was for children who were “classically school refusers and typically late”.

“Betsy waits by the school gates every morning and greets the children. Such a simple act has removed the fear some had of coming to school.”

An Ofsted report published in October highlighted “when things get tough spending time with Betsy the dog is a great help!”

The trust has spent £12,000 so far on the dogs and forecasts future costs of about £2,200 a dog for food, insurance and vet bills.

But Carson said it was “money well spent” and “hugely cost effective” when compared with more traditional mental health remedies such as education welfare officers.

But the trust had to do a risk assessment first, looking at issues such as fear of dogs or allergies.

The Dogs Trust charity also “strongly advises” against introducing a dog to a school environment as it could be “extremely stressful” for most dogs.

Each Woodlands dog is assigned to a “handler” – a teacher who volunteers to take on the day-to-day responsibility, including taking it home.

The dogs, which are undergoing Pets As Therapy (PAT) training, engage with pupils intermittently throughout the day for 10 to 20-minute activities that include walks around the playground.

The trust said the dogs also helped pupils to settle down to reading.

An Ofsted report for Winford Church of England primary in Bristol from 2016 said the school dog Fernie was a “great encouragement for reluctant readers who agree to snuggle into Fernie and share a book with him”.

The dog is owned by headteacher Nik Gardner and was trained with the help of Dogs Helping Kids charity. Fernie attends three days a week while Tango, a puppy in training, attends the other two days.

Ofsted also commended Hodnet primary in Shropshire and Ladysmith junior school in Devon for the use of Ffion the therapy dog and Archie the reading dog.

Secondary schools are benefiting too. An Ofsted report published earlier this month found students at Shooters Hill Sixth Form College in south London, “really value the comfort they gain from a therapy dog when they are worried or anxious”.

Findlay, who comes in four days a week, greets college refusers at the gate and “helps” them come in.

Jan Atkinson, the college’s principal and chief executive, said other students asked to see Findlay if they were upset. “It is all about personal development and wellbeing of the staff and students.”

Matthew Robinson, PAT’s national volunteer and events manager, said there was “an incredible amount of demand . . . which we just can’t meet at the moment”.

But other animal charities are not as keen.

People for the Ethical Treatment of Animals told The Guardian this year the classroom “simply isn’t a suitable home for an animal”.

The RSPCA also discourages education establishments from keeping and looking after animals, adding that the pets often needed to be rehomed.

Earlier this year Sir Anthony Seldon, vice-chancellor the University of Buckingham, called for every school to have a dog or pet to reduce stress in the classroom.

Speaking at the Ultimate Wellbeing in Education Conference, he said: “It’s very easy to do, it’s very cost effective, the evidence is very clear that it works, and every single school – primary, secondary, special – should have dogs.”

Correction: This article was amended on December 22 to clarify Fernie was not part of the PAT scheme.