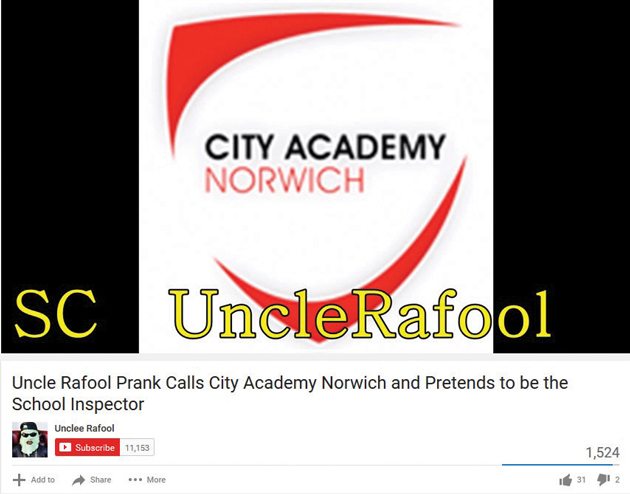 A prankster has called more than 150 schools across the country impersonating an Ofsted inspector and telling staff they have lost their jobs. Heads who have fallen prey to the actions say it is distressing and time-wasting, but the man behind the calls says it is part of his comedy act.

“Uncle Rafool”, a 21-year-old, claiming to be from Port Harcourt in Nigeria in his online biography, performs the fake phone calls on request from pupils who want to see their teachers embarrassed. He then shares recordings on YouTube.

He calls schools, pretending to be from Ofsted and tells staff members they have not complied with “upcoming inspection requests” before telling them they are fired, must pack their belongings and leave the school.

City Academy Norwich fell victim to the “joke” and a video recording of a phone call to principal Mary Sparrow was uploaded to YouTube last year.

Uncle Rafool starts by asking what time “we” should come for the inspection, leading to him telling the headteacher that he is from the inspectorate.

Ms Sparrow tells the caller she cannot let him come onto the school site unless she is sure he is from the inspectorate.

After some to-ing and fro-ing, Uncle Rafool asks for the name and role of Ms Sparrow and tells her to leave the office. Ms Sparrow says she will take legal advice and hangs up.

Ms Sparrow told Schools Week: “The fact one individual has prank-called so many schools really isn’t a laughing matter. A headteacher’s time is hugely pressured and valuable.

“Perhaps Uncle Rafool should be billed for all of the senior school leaders’ time he has wasted. I expect he wouldn’t find the calls quite so funny then.”

Uncle Rafool, who has nearly 11,000 subscribers on YouTube and describes himself as an entertainer behind a mask, told Schools Week most people find the pranks funny.

“As a comedian you can’t please everyone,” he said. “No one’s safety is at risk when I’m talking to them and I don’t cross the line to make anyone fear for their safety. It is very obvious it is done for a laugh and if people don’t find it funny then that is understandable but I am just a comedian trying to entertain my supporters.”

He added that some schools who have seen the funny side of it later follow him on Twitter and even invite him to the school to perform special assemblies for pupils.

“There are quite a few schools that embrace what I do but also a lot of other grumpy ones that like to see everything as trouble,” Uncle Rafool said.

Russell Hobby, general secretary of the National Association of Head Teachers, offered advice to school leaders affected
by similar calls: “I know Ofsted can overreach sometimes but they do not have the power to sack a member of staff. If a school is worried about the conduct of anyone claiming to represent Ofsted they should contact the regional director immediately.”

An Ofsted spokesperson provided guidance on inspections: “Inspectors will normally call a school the day before a routine inspection is due to take place. They will state where they are calling from, ask to speak to the head of the school and will confirm the details of the inspection by email after the conversation. All schools are given contact details for the inspector if they need to get in touch.”