Ofqual has recorded a dramatic 26-per-cent increase in the proportion of GCSE, AS and A-level exam papers that were adapted to make them accessible for candidates with a disability, illness or special educational needs in 2016/17.

This leap is due largely to a rise in the use of “non-interactive” electronic question papers, it claims. 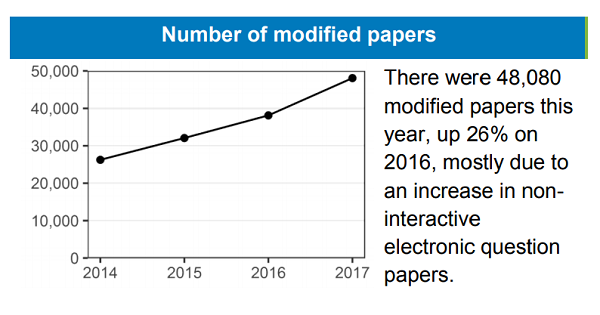 According to data released today, 48,080 papers were modified in the summer 2017 exams, to ensure that ensure no pupils were unfairly disadvantaged when sitting their exams. This was up from 38,115 the previous year.

Modified papers are prepared for pupils with, for example, visual impairments or language comprehension disorders, in order to fairly enable them to show their skills, knowledge and understanding.

The number of non-interactive electronic question papers used in 2017 was 20,815, an increase of 47.5 per cent on the year before. 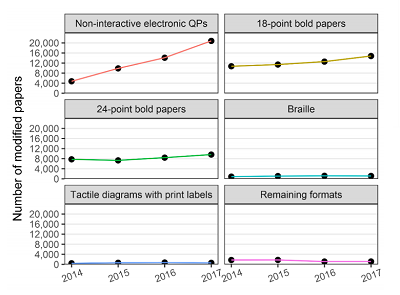 The number of braille papers and papers with tactile diagrams decreased by 4.9 per cent and 17.2 per cent respectively.

Gaining 25 per cent more time in exams is still the most popular type of access arrangement, making up 57 per cent of all approved arrangements, compared with 55 per cent last year.