Rev Steve Chalke, founder and leader of the Oasis Charitable Trust, which has just been awarded the contract to run England’s first secure school, knows the magnitude of the job that lays ahead.

Rehabilitation, not punishment, is going to be at the forefront of Oasis Restore, a school for young offenders to be built on the site of the Medway Secure Training Centre in Kent.

When I meet Chalke at Oasis’ office near Waterloo Station, it’s been less than a week since he discovered the trust had secured the contract. Oasis hasn’t even had its first meeting with the Ministry of Justice (MoJ) yet.

“We understand that some people will feel that we are unworthy to do this, but the bar is pretty low at the moment. It is pretty low and we are failing young people across this country.”

The secure school, due to open in late 2020, will have 64 children between the ages of 12 and 17. Chalke says that the £5m the MoJ has committed to the project will go towards building work.

Chalke says that young people are currently locked in their cells from 7.30pm, but he is hoping to create a community in the four new housing units, with students spending less time in solitude.

Language clearly matters to Chalke. Young people at the centre will be called students, not prisoners or inmates. They will live in houses, not wings. Their time at the school will not be considered a sentence and leaving the school is not a release, but re-establishing yourself in the community, Chalke says.

However long young people are at the school, Oasis wants pupils to feel cared for, listened to and to “set up a pathway with them that walks with them beyond the gate again”.

The young people attending the school could be at the site anything from a few days to several years. This presents unique challenges to how the curriculum will be tailored to meet the needs of pupils, some of whom will be reoffenders and others who will be entering the system for the first time.

“The only day that matters when you arrive is the day you leave. And everything has to be in preparation for that date so that you can leave with a sense of health, wellbeing and significance and so that you can resettle in the community and be stable there.” 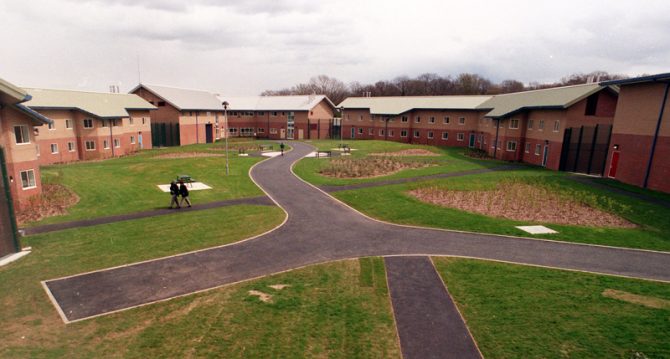 Pupils will travel to the school from all parts of the country. The government plans to open a second secure school in the north of England, but no date or specific location has yet been released and Chalke is cautious about revealing whether Oasis is ready to take on another secure school so soon after winning this contract.

The Oasis charity is the sponsor of the Oasis Community Learning academy trust. The government says that three quarters of the trust’s academies operate in the UK’s most deprived areas, with most rated by Ofsted as failing at the time they were taken over. Chalke tells me that just this week, the trust celebrated its fortieth school to have come out of special measures – a record that he’s proud of.

But of the 52 Oasis academies across England, 19 per cent are still classified as failing. Eight have been told by the schools inspectorate that they require improvement and two are deemed ‘inadequate’.

Although Chalke admits that the trust has two or three “persistently troubled schools”, he insists he works closely with the DfE and Ofsted to address these concerns. “Before they (the schools) came to us, they were in trouble for 50 years,” he says.

“Turning round a school is sometimes a quick fix, it really, truly is. And sometimes it’s a really long, hard, hard job. It depends what’s wrong with the engine. So if we have an uninformed public that simply want a magic cure for everything, well Oasis are the wrong people to ask. You can also get quick cures by just pumping kids through exams… but you’re not actually changing the environment and the ethos and the atmosphere of the school, it takes a long time.”

If we have an uninformed public that simply want a magic cure for everything, well Oasis are the wrong people to ask

And time is what Chalke has invested. The 63-year-old, who founded Oasis in 1985, speaks passionately about the trust’s community, housing and educational projects.

The trust runs foodbanks, community farms, choirs, football teams and even a debt advice centre and a library. And it is this community ethos which Chalke hopes to bring to the secure school.

G4S held the contract to run Medway between 1998 and 2016 until a BBC Panorama investigation exposed mistreatment at the centre. A serious case review said that staff with no experience working with children were recruited and restraint techniques were heavily criticised.

Talking about Oasis’ ethos, Chalke says: “[If we fail] it’s not going to be good for us, but it’s going to set back the cause of the therapeutic approach, a trauma-informed approach to working with young people by a decade or two.

“All the hawks are going to say ‘told you so, punish them, lock that door’. So we know that we owe it to each young person and we owe it to the Ministry of Justice who trusted us and everybody else to make this work.”

Services offered to young people will include mentoring and providing pupils with an Oasis ‘passport’ which will detail their journey at the school and help prepare them for when they leave.  Chalke also intends to set up a national network of mentors who will provide ongoing support.

Plans for secure schools have been in the pipeline following scathing criticism of existing young offender services in a 2016 review by behaviour expert Charlie Taylor.

In his report, Taylor warned that children in existing public sector youth offender institutions received an average of only 15 hours of education a week, with an ambition of 30 hours prevented by “staff shortages and rising levels of violence”. Children in custody are often unable to finish courses or sit exams they have been working towards for years, he warned.

Edward Argar, justice minister, said: “Secure schools are critical to our vision for youth custody – placing education, healthcare and purposeful activity at the heart of rehabilitation.”

When asked what a successful secure school looks like to him, Chalke says: “The same thing as a successful school. Young people who become fulfilled through an inner journey to a sense of self-worth, self-love and self-respect who, five or ten years after leaving, are still thriving.

“One of the things we want to set up is an alumni. We want young people to be proud that they were part of this and for them to come back and mentor.”