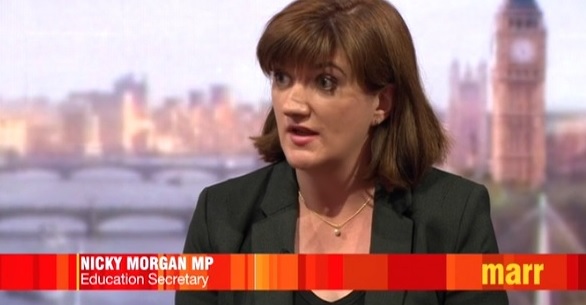 Speaking on the Andrew Marr Show this morning, education secretary Nicky Morgan agreed that academies are a ‘better kind’ of school than those overseen by local authorities.

Ms Morgan appeared on the show to reval planned government powers for firing headteachers and forcing ‘coasting’ schools – described as those with poor levels of progress – to become academies.

An education bill granting these powers will be outlined in the upcoming Queen’s Speech.

Describing the plans, Ms Morgan said that schools rated as requires improvement by Ofsted, and which could not show a credible plan for improvement, would face intervention. This could include the replacement of headteachers.

“We will look at the academy model, too” she said.

Asked if she believed that academies were a “better kind” of school than those overseen by local authorities, Ms Morgan said: “I do.”

She added: “We can see in the results that students do better in academies, both at key stage 2 – at the end of primary school – and GCSEs.

“I think the best people to run schools are the heads, and the teachers, and the governors.”

The education secretary would not be drawn on her preferred number of academy conversions, saying instead that she had “no targets”.

“I am interested in what works. I want people to make this decision themselves,” she said.