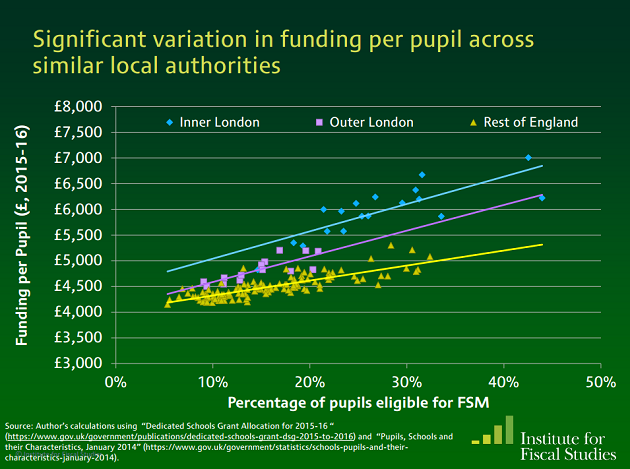 The implementation of a national funding formula for schools could create “significant numbers” of winners and losers or lead to large cuts for inner-London schools, the Institute for Fiscal Studies (IFS) has warned.

The IFS today set out two options which could be explored by the government as it seeks to introduce a national formula from 2017/18, a move announced by chancellor George Osborne yesterday. Speaking at a briefing in London, IFS education programme director Luke Sibieta said a local authority formula based on the same principles as April’s £390m top-up of under-funded schools would mean the largest cuts would fall in inner-London.

Mr Sibieta said a school-level formula, a single formula for all schools in England, would equalise differences across similar council areas and would “harmonise” 150 different formulas into one, but would create “significant numbers” of winners and losers and the loss of local discretion.

He added: “One of the key questions for the government is how much local discretion it should allow for, and how much is desirable in the long-term.”

Mr Sibieta also warned that the impact of the cuts faced by some schools in the wake of the implementation of a national formula would be more significant in the context of a real-terms per pupil funding cut for schools, which the IFS has estimated at 7.5 per cent over the course of this Parliament.

He called for the consultation planned for January to set out implications of different options and make plans for transitional arrangements, adding: “You wouldn’t want these changes to take place overnight”.