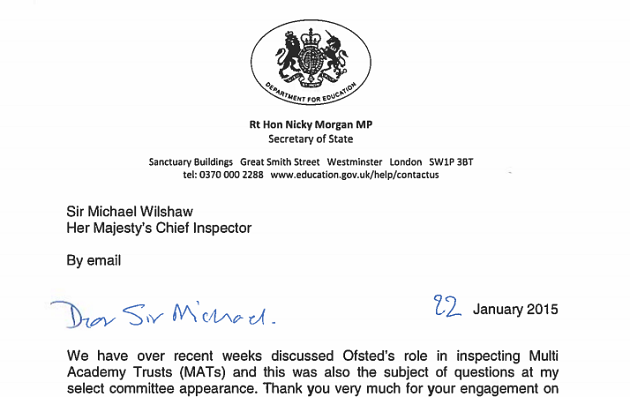 Education Secretary has written to Ofsted advising of a new process for ‘inspecting’ multi-academy trusts (MATs).

In a move which will be seen as simply a formalisation of the existing method used by Ofsted to inspect MATs, Ms Morgan wrote of her preference that Ofsted continue to batch-inspect multiple schools rather than the trust itself.

However, she added that a letter should be sent to all trusts after the batch inspections and published online. The letter, she said, should include “performance of the academies which have not been inspected, so that the wider position across the MAT can be understood”.

She said: “I recognise the importance of transparency and support Ofsted’s preference for publishing a letter to the MAT summarising the findings from the individual inspections of the academies which have been batched together, as well as additional information gained about the support provided by the MAT.

“Prior to publication, the MAT should be provided with the opportunity to comment on the conclusions ans1ng from the focused inspections and consider the evidence underpinning them. Their response should be reviewed before publication and reflected appropriately in the final published letter.

“The published findings should make clear the sample of academies that have been included in the focused inspection and those which have not.

“lt should also reflect the policy and legal frameworks that govern the responsibilities of MATs. I am pleased that you agree that a binary judgement of the effectiveness or ineffectiveness of the MAT is inappropriate and that comment on the MAT’s performance should be provided through narrative.

“The publication of a letter to the MAT summarising the findings from the focused inspections will of course be in addition to the publication of the individual inspection report for each inspected academy in question, which will be published in the normal fashion.”

An Ofsted spokesperson said: “We welcome the Secretary of State’s letter clarifying the arrangements by which Ofsted will fully inspect Multi Academy Trusts (MATs). This will ensure Trusts are duly accountable.