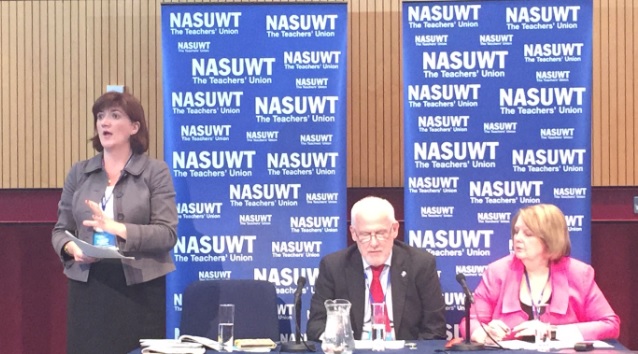 Creating “well-rounded” young people with “character, resilience and grit” is the fifth priority for the Department for Education (DfE), Nicky Morgan has revealed.

Mrs Morgan, who today became the first Education Secretary to address an NASUWT fringe at Conservative Party Conference in more than four years, defended the record of her predecessor Michael Gove, but also showed she wasn’t afraid to expand on his legacy.

She reminded the gathered delegates of her department’s four main focuses, but said she wanted to extend the list.

She said: “I have added a fifth priority to the department, because academic standards are of course critical, but we also, I think, in terms of our shared ambition for preparing our young people for life in Britain, want to have young people who develop as well-rounded individuals.

She said the fifth priority included “emphasising character, resilience, grit”, adding that they were “all…things which I think probably many of our professionals in the teaching workforce already work so hard on”.

She added that she was talking “in terms of preparing children for employment, and the importance of activities such as sport, creativity, debating and the list goes on, ways in which schools will develop the young people they are educating”.

I have added a fifth priority to the department

Mrs Morgan said the first four priorities for the Department for Education were around having the “best possible schools”, which she said was being achieved through the free schools programme and other changes to school structures, and the “best possible workforce” through collaboration and development.

She added academic standards through a new curriculum to the list, and said the fourth priority was about protecting vulnerable young people, in which, she said, schools had an important referral role to play.

She said: “I make no apologies for our very clear plan for education. In this country there are five things that we particular focus on in the DfE, firstly having the best schools that we possibly can do, and yes that has meant changing the school structures, we now have academies, we now have free schools, we have UTCs, we have studio schools and of course we have the state maintained sector and the independent sector as well.”

But although the fifth priority has been welcomed in principle by NASUWT general secretary Chris Keates, she warned that other elements of education policy could stand in the way.

Speaking to Schools Week after the fringe event she said: “I think schools would say that is what they try to do all the time to make sure that they are producing well-rounded individuals.

“However, if Nicky Morgan is setting that as her fifth priority, a priority we would support, then clearly what she has got to do is create the climate in schools where they can actually work on creating well-rounded individuals.

“It actually involves having a broad, balanced curriculum, and involves children having time to develop as individuals as well as in teamwork.

“I think at the moment, the handicap to her fifth priority is going to be this extreme narrowing which is taking place in schools, on a very narrow academic agenda that is dictated by a punitive accountability regime, and if she wants to deliver on that fifth priority, then she is going to have to look at the context in which she is trying to take that priority forward.”