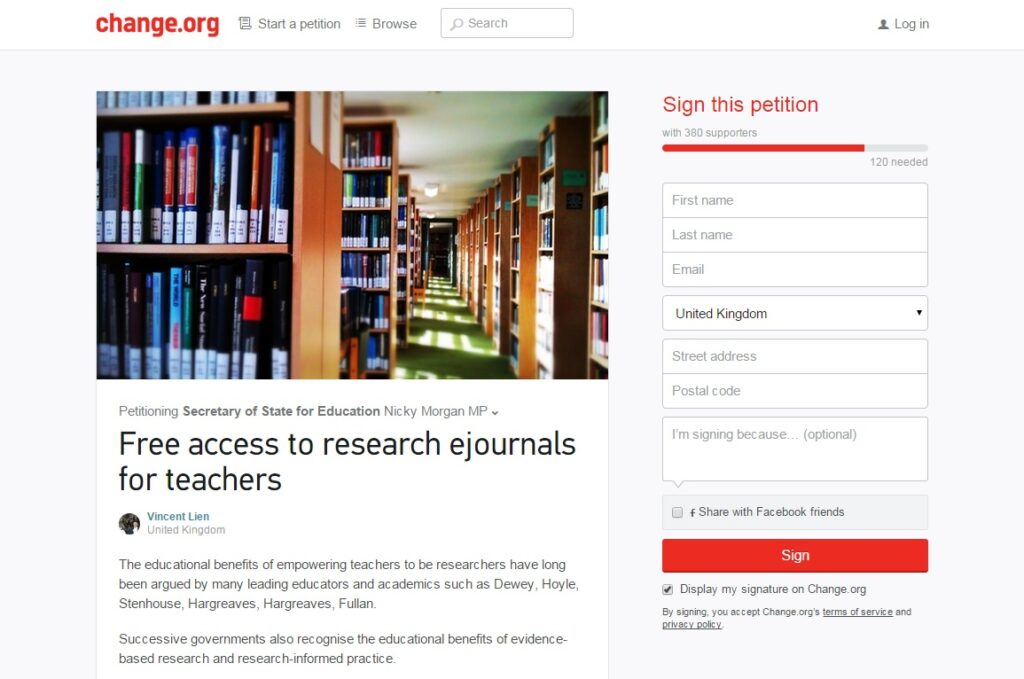 A petition calling for teachers to be given free access to research journals continues to attract new supporters.

On Friday, Schools Week reported that the petition, set up by English teacher Vincent Lien had been gathering momentum as part of the #teacher5aday push on Twitter to get teachers thinking about their well-being.

The petition has now cleared the 500 supporters mark, with 560 at the time of writing.

Mr Lien said that he was motivated to set up the petition after completing a Masters of Education, and finding he no longer had free access to academic research. “If, as teachers, we’re supposed to be able to improve our practice through research … surely the best way is for teachers to be able to access research,” he said.

One of the petitioners – David Fawcett – wrote: “If we are truly going to engage with research as a profession, we should have open access to it.”

The campaign has also received the backing on Twitter of Sam Freedman, a former policy advisor to Michael Gove.

No brainer for the DfE RT @miss_mcinerney: It's bonkers that teachers don't have access to journals. Let's change it: http://t.co/2NCZGDt8BP

Sir David Carter, one of the eight regional schools commissioners who form part of the government’s new ‘middle tier’ of accountability for academies, also offered his support to the petitioners.

Several of those supporting the campaign have noted that NHS staff receive free access to certain journals, prompting questions as to why similar arrangements are not in place for those working in education.

A DfE spokesperson said it was “actively supporting” efforts to increase the use of research in the classroom, and pointed to the Department’s recent World-Class Teaching Profession consultation, which proposed an “online platform for knowledge sharing”, but stopped short of offer support for the petition’s aims.