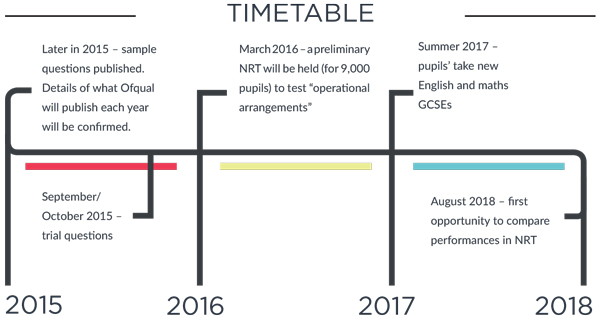 The new national reference tests (NRTs) are a subject of much discussion, rumour and anxiety. Announced by Ofqual last year to help set GCSE boundaries, the exams regulator has now released a guide on how the tests will work. We pick apart the details

The idea behind the national reference tests is to monitor, over time, how students are performing and if a sudden surge in high or low grades is because a cohort’s abilities differs to its predecessors or because of a marking or examination issue.

Chief regulator Glenys Stacey explains: “Currently, our comparable outcomes policy allows exam boards to increase the proportion of students awarded a higher grade in a particular year, provided there is evidence to justify this.

“However, boards have limited evidence to support judgments of a genuine change in student performance at the national level.

“We know teachers are concerned their efforts to raise standards, year by year, may not be fully reflected in the awards made at GCSE; this is the gap that the new tests are designed to address . . . participation benefits both schools and students, as it helps provide the evidence of improving school performance at the national level that can be reflected in awarding.”

How the test will be designed

Selected pupils will take reference tests in either maths or English, based on the content of the new GCSEs of 2017.

Ofqual says the NRTs will not necessarily be in the same style as the new GCSE questions, or reflect content of any of the exam boards, but they will be “suitable” for GCSE students.

No pupil will have to take the whole test. They will complete just one booklet out of several, which will take an hour.

The maths reference test will not be tiered, as are the GCSEs. But there will be “clearly marked” questions at the end of each booklet aimed at those sitting the higher-tier GCSE.

The English paper will not test the spoken element of the GCSE. It will include questions that elicit longer and shorter (one sentence) responses.

The questions will not be published as the plan is to keep them “largely the same” from year to year to enable comparisons of performance standards.

Who takes the test?

About 9,000 pupils. A random sample of 30 year 11 pupils from 300 schools will be picked. A school has about a one in ten chance of being chosen.

The National Foundation for Educational Research (NFER) is in charge of selecting the schools and pupils. Different schools will be used each year.

Chosen schools will have to provide a list of all year 11 pupils taking maths and English language, from which NFER will randomly pick those who will take the test in March.

Headteachers are able to exclude pupils “at their discretion and in exceptional circumstances” – for example, if taking the test would cause undue stress for the pupil. Ofqual, however, expects this to be “rare”.

The school must provide a room where the pupils can take the test and it will be invigilated by an NFER administrator. The tests will take place on a pre-agreed day.

What results will be published and when?

Ofqual will publish national results at the end of August each year, around the time when GCSE results are published. At the same time an explanation will be given into how performance in the NRTs has been taken into account when GCSEs were awarded.

There will be no results for individual pupils or schools – only information at a national level will be released. Performance in the NRTs will not go on a pupil’s school record.

The results of the reference tests will “set the percentage of students in that year who are predicted, based on the tests, to achieve at least a grade 4, a grade 5 or a grade 7 in their GCSE”. A year-on-year comparison can then be made and if there are any changes, that will impact the awarding in GCSEs.