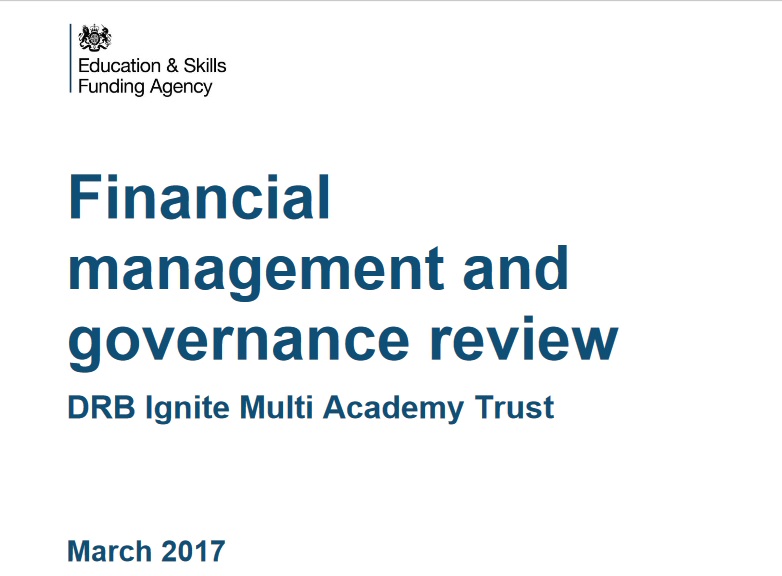 A trust has been issued with a financial notice to improve after a government investigation found hundreds of thousands of pounds had been paid to companies linked to its directors without following rules.

The probe into the DRB Ignite multi-academy trust, which runs eight schools in the west Midlands, found a number of “significant failings and weaknesses”.

The accounting officer role had been rotated between three of the trust’s members or directors, but at no time were any of them on the trust payroll – which breaks funding rules.

Education and Skills Funding Agency inspectors were also critical of the trust’s operating model, as it has significant links to the connected commercial companies.

A company called DRB Education Trust is listed as the MAT’s sponsor, but the ESFA found it was “dormant and insolvent”.

The trust is also described as part of the DRB group of companies – which includes organisations that provide services to the education sector through service-level agreements.

No evidence found conflicts had been managed

But the government found that no formal procurement process was undertaken for any of the central expenditure – breaching rules.

No evidence was available to suggest actual or perceived conflicts of interest had been managed for connected parties, breaching funding rules and the seven principles of public life, the investigation found.

The trust also entered a 35-month service contract with the DRB group on October 2015, with total expenditure at £327,000 by December last year.

However trust directors confirmed during the investigation that no procurement process was undertaken for this contract.

Invoices from DRB group companies were also signed on behalf of the trust by one of its own directors.

“There is a clear and significant conflict of interest when the trust contracts with one of its own directors, and that same director also approves his own invoices for payment,” said the ESFA in its report.

Another contract was signed with a director’s company, worth £1,250 for two days a week for “development of the trust and associated procedures”.

This contract had not been signed by anyone on behalf of the trust, and made no reference to the “as cost” requirements.

There were also concerns over governance arrangements: All members of the trust were also directors, and all five of the senior management team were also members and directors.

The accounting officer at the time of the investigation in February was also a member, a director, and the company secretary.

Academy funding rules state governance structures where members are also employees are not considered best practice – as it removes the distinction between the two governance levels.

It was also found the trust has no investment policy, despite forecasting a cumulative surplus to be around £1.3 million at year-end.

The ESFA said these issues need to be “urgently addressed to ensure internal control arrangements within the trust are operating effectively and assure the safeguarding of public funds”.

Under the FNtI, the trust has been told to commission two independent reviews into governance and financial management, and also set out an action plan by the end of September.

If the trust is unlikely to meet the imposed conditions the government stated it will “consider and explore contractual intervention options”.

The trust told Schools Week it had already been working diligently with the ESFA to urgently respond to the “serious situation” prior to publication of the report.

Richard Martin, trust chair, added: “We are fully focused on ensuring governance and financial processes are fully compliant with all the recommendations made in the report, we aim to complete this process by the end of August when will report back to the ESFA.”