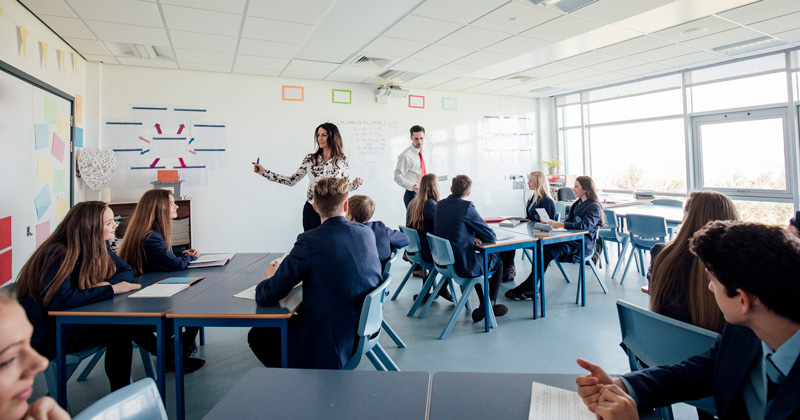 The government has confirmed its school reopening plans, with all settings expected to reopen on March 8.

Secondary schools will be given flexibility on how they manage testing in the first week back. The need for face coverings will also be extended to secondary school classrooms.

Prime minister Boris Johnson confirmed the plans in Parliament this afternoon, and the Department for Education has published updated guidance for schools.

Here’s what we learned from the document.

1. Attendance ‘mandatory’ for all pupils

The DfE’s guidance states that school attendance will be “mandatory for all pupils from March 8”.

The usual rules on attendance will apply, including parents’ legal duty to secure their child’s attendance at school.

The ability to issue sanctions such as fines will also be reinstated, and schools will be responsible for recording attendance, following up absence and “reporting children missing education to the local authority”.

Returning secondary pupils will be tested three times on site and then again once at home in the first two weeks after reopening. They will then be provided with home kits for twice weekly testing thereafter.

During the week of March 8, pupils will only be expected to return following their first negative test result.

The guidance states that during that week, schools should use code Y to record the attendance of secondary pupils not expected to attend school for lessons because of the testing programme.

They should use code X if a child is self-isolating or quarantining because of coronavirus.

Secondary and primary staff will be given kits for twice weekly testing at home, but there will be no testing of primary pupils.

More details on the testing programme can be found here.

The government confirmed today that it is recommending that the use of face coverings in secondary schools be extended to all indoor environments, “including classrooms”, for a “limited period” until Easter.

However, the DfE is now recommending face coverings “should be worn in classrooms or during activities unless social distancing can be maintained.”

This does not apply in situations where wearing a face covering “would impact on the ability to take part in exercise or strenuous activity, for example in PE lessons”, the DfE said.

There are also exemptions for those who rely on “visual signals for communication, or communicate with or provide support to such individuals”.

In primary schools, face coverings should be worn by staff and adult visitors “in situations where social distancing between adults is not possible (for example, when moving around in corridors and communal areas)”. But children in primary school “do not need to wear a face covering”.

The guidance states that schools should “consider staggered starts or adjusting start and finish times to keep groups apart as they arrive and leave”.

However, this “should not reduce the amount of overall teaching time”

Staggered starts may include “condensing or staggering free periods or break time but retaining the same amount of teaching time”, or keeping the length of the day the same “but starting and finishing later to avoid busy periods”.

Schools should consider how to communicate changes with parents, and remind them not to gather at school gates or come on site without an appointment.

The government had originally planned to use lateral-flow tests to keep pupils who were in contact with confirmed cases in the classroom.

However, this process was paused last month amid concerns about the effectiveness of the tests.

6. Change to definition of an ‘outbreak’

The latest guidance states that schools with two or more confirmed cases within 14 days may have an “outbreak”, and should call the dedicated advice service via the DfE’s helpline.

Previously, the guidance stated that two or more cases within 10 days may be considered to have an outbreak.

7. No rotas or class size reductions

Schools “should not plan for rotas as there is no requirement to reduce occupancy in schools”, the guidance states.

There is also “no need for class sizes to be adjusted from the usual size”, the DfE said.

8. CEV pupils and staff to stay away

According to the DfE, although children are “gradually being removed” from the shielding patients list, those who are confirmed as clinically extremely vulnerable should “shield and stay at home as much as possible until further notice”.

“They are advised not to attend school while shielding advice applies nationally,” the guidance goes on to say.

Clinically extremely vulnerable staff are also still being advised not to attend the workplace.

Schools should talk to their staff about how they will be supported, “including to work from home”.

Staff living with someone who is CEV “can still attend work where home-working is not possible and should ensure they maintain good prevention practice in the workplace and home settings”.

In its roadmap, the government has said it “anticipates that it will no longer be necessary to advise shielding beyond the end of March 2021”.

The DfE says it is “likely that some pupils, parents and households may be reluctant or anxious about attending school”.

This may include pupils who have shielded in the past but no longer need to, or those living in a household with someone who is clinically vulnerable or extremely vulnerable.

Schools should discuss “any concerns with parents and provide reassurance on the measures you are putting in place to reduce any risks” and remind parents that pupils of compulsory school age “must be in school unless a statutory reason applies”.

School kitchens are expected to be “fully open” and providing food for pupils including those eligible for free school meals.

However, schools should also “continue to provide free school meal support to pupils who are eligible for benefits-related free school meals and who are learning at home during term time”.

Although attendance will be mandatory from March 8, schools will still be required by law to provide remote education to any pupils who need to continue to learn from home.

“This includes, for example, where such guidance means that a class, group or small number of pupils need to self-isolate or that clinically extremely vulnerable children are to shield,” the guidance states.

“All such pupils not physically unwell should have access to remote education as soon as reasonably practicable, which may be the next school day.”

From March 8, schools should “work to resume” all before and after-school educational activities and childcare for pupils “where this provision is necessary to support parents to work, attend education and access medical care, and to support pupil’s wider education and training”.

The government will amend its Covid regulations to allow for this, the DfE said.

However, it is “intended that these inspections will resume in the summer term”, and the DfE is “continuing to keep the inspection arrangements under review”.

In the meantime, Ofsted will continue with its programme of non-graded monitoring inspections of ‘inadequate’ schools, those judged as ‘requires improvement’ in their last two inspections and some other schools that require improvement.