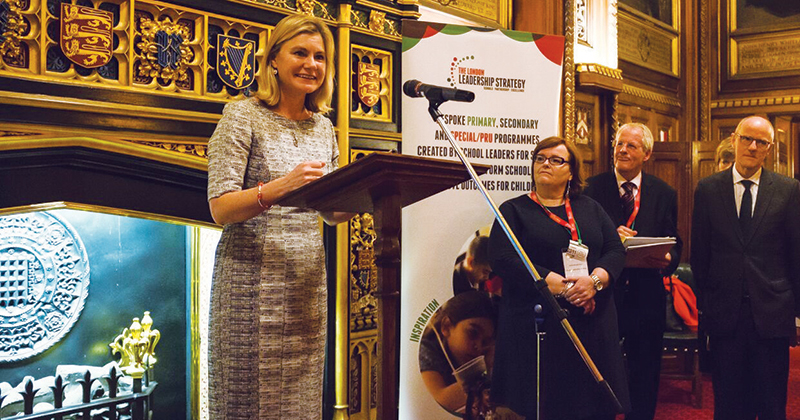 MPs, policymakers and teachers recently joined forces to celebrate the work of headteachers across the country.

The reception at Speaker’s House was hosted by the London Leadership Strategy (LLS), an organisation run by headteachers to improve educational outcomes for children and young people.

Carter, who admitted that it was a “real relief” not to have to talk about “the benefits of multi-academy trusts”, described his own leadership journey, from a pupil observing his headteachers, to being thrust “in at the deep end” as interim head of a school in Gloucestershire. Greening praised the work of headteachers, attributing her surprise appearance to an invitation from LLS director Jacqueline Valin, principal of Southfields academy, a school in her southwest London constituency.

The managing director of the LLS, Anita Kerwin-Nye, spoke of what made a school world class. “The real test is that they are inclusive and – even in the era of league tables and competition – generous in sharing their resources to benefit all pupils, not just those in their own schools.”

The event was organised to coincide with the launch of a new LLS publication, Inspiring Greatness, a collection of case studies showcasing individual areas of excellence in schools.

Each school featured is a participant in the strategy’s Going for Great programme, led by Rachel MacFarlane, principal of Isaac Newton academy in east London, which works with Ofsted-rated outstanding schools to identify and share good practice.

The London Leadership Strategy was born out of London Challenge, which played a pivotal role in turning around the performance of London schools between 2003 to 2011.

Established in 2002, the challenge provided school-to-school support through consultant heads and helped to boost the capital’s schools to the highest performing in the country.